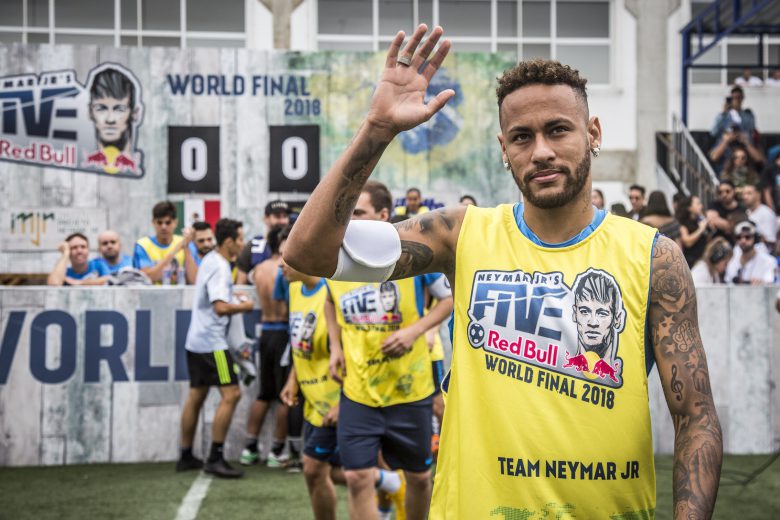 Red Bull Neymar Jr’s Five is back! Be a part of it for your city and you will get a chance to play against Neymar Jr. himself

Red Bull Neymar Jr’s Five is the Brazilian star’s signature five-a-side tournament bringing players aged 16 to 25 from all corners of the world together to celebrate their shared passion: football. It is a fast, technical and fun competition which sees two teams of five players, sans a goalkeeper, have 10 minutes to strut their stuff and win a chance to impress Neymar Jr. The twist in this thrilling affair is that for each goal scored by a team, a member of the opposition will have to leave the field. The team with the maximum players take the spoils.

The tournament is based on the belief that footballers never earn their skills in big stadiums at big clubs. Their journey almost always begins on the streets, with their friends, like it did for Neymar Jr. In the streets, their main obstacles are not the opposing defenders but the hard gravel, sweltering heat and the blinding dust. Most legends started out on a mere, obstacle-filled street, but turned the mere street into a path. A path to blinding success. Just ask Pele, Alfredo Di Stefano or Neymar Jr. Neymar Jr’s journey started with a street and a dream and continues with a stadium and a fairy-tale. Last year’s edition of Red Bull Neymar Jr’s Five saw National Champions, Joga Bonito Mumbai represent India in Brazil in the World finals, and gained valuable experience with historic wins against Chile & Luxembourge to qualify for the knock out rounds. Not only India won a match at Red Bull Neymar Jr’s Five World finals for the first time but also qualified for the round of 32 (knock out rounds).

Team India (Anthony Machado, Johnson Dsilva, Mervin Stephen, Preetam Mahadik, Daniel Fernandes, Scott Dsouza and Pratik Kadam) convincingly outplayed Chile & Luxembourg 5-0 in Group J to qualify for the knock out rounds to face Colombia. India gave a tough fight to Colombia but fell short by the golden goal, leading the latter to a win 2-1 and qualifying for the round of 16. Colombia beat Australia & Brazil in Round 16 and Quarter Finals respectively to face Argentina in the semi-finals.

The signature football tournament saw more than 1, 25, 000 people taking part across 62 continents and 6 countries in the Red Bull Neymar Jr’s Five 2018 World Finals last year, with the hope of making it all the way from the qualifiers to the World Final in July at the Instituto Projeto Neymar Jr in Praia Grande, Brazil and won by Mexico.

Also Read: Mumbai hope to turn it around against desperate ATK