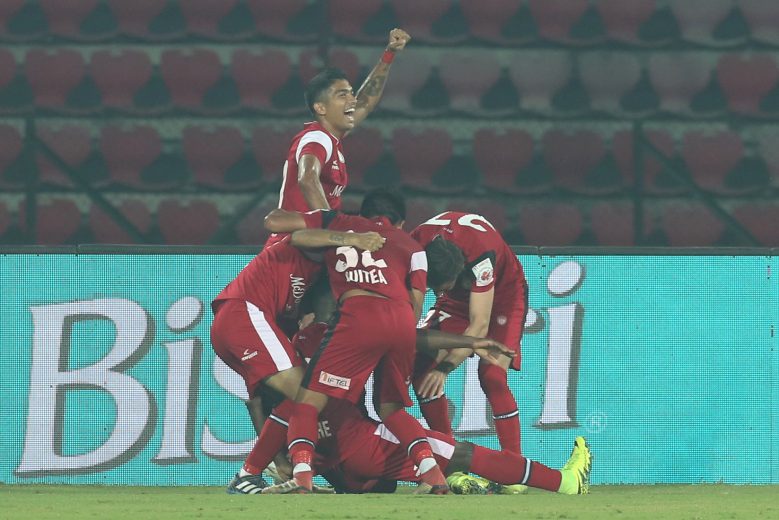 A late 30 yard strike by Bartholomew Ogbeche helped the highlanders pick all three points propelling them to the 3rd position as they inflicted a tenth defeat of the season on Chennaiyin FC.

NorthEast started with the prolific duo of Ogbeche and Federico Gallego upfront while Chennaiyin FC opted to hand a start to only four foreign players. C.K.Vineeth and Halicharan Narzary, who have joined Chennaiyin on loan from Kerala Blasters, made it into the starting XI.

It was the visitors who started better and could have taken the lead in the eighth minute as Raphael Augusto danced his way into the opposition box. However, his final shot was weak and off target.

Thereafter, it was a case of one way traffic with the hosts seeing a lot of the ball. Gallego’s short corner found Lalthathanga Khawlhring who sent the ball back for the Uruguayan. The NorthEast United striker, in ample space inside the box, dropped his shoulder but his angled effort went over the bar. Just before the half hour mark, Gallego’s corner was punched clear by Karanjit Singh. Khawlhring’s cross into the box found Rowllin Borges whose header lacked power and direction as another chance went begging.

In the 37th minute, Ogbeche and Borges combined with the latter laying it for Redeem Tlang but the 23-year-old’s effort blazed over, much to the disappointment of coach Eelco Schattorie. After the break, NorthEast had a half chance when Reagan Singh’s cross from the right found Ogbeche whose first touch was a tad too heavy. Borges picked up the pieces inside the box but his short was wayward to say the least.

The Highlanders had a couple of free-kicks around the hour mark. Gallego’s angled low shot was kept out by Laldinliana Renthlei. This was soon followed by another opportunity when Gallego tried to chip the ball but his shot missed the target.

NorthEast were unlucky to not have taken the lead when Tondonba Singh made a goal-line clearance from a Tlang effort after Karanjit didn’t clear the ball well from a corner. From the ensuring corner, Borges’s header was collected only on the second attempt by a shaky Karanjit.

However, it was Karanjit who made a point blank save in the 81st minute to deny Ogbeche whose header was on its way in from a corner. The breakthrough finally came in the 87th minute as Ogbeche’s wonder-shot found the back of the net. The Nigerian’s left footed strike from around 30 yards nestled into the net giving no chance to Karanjit whatsoever.