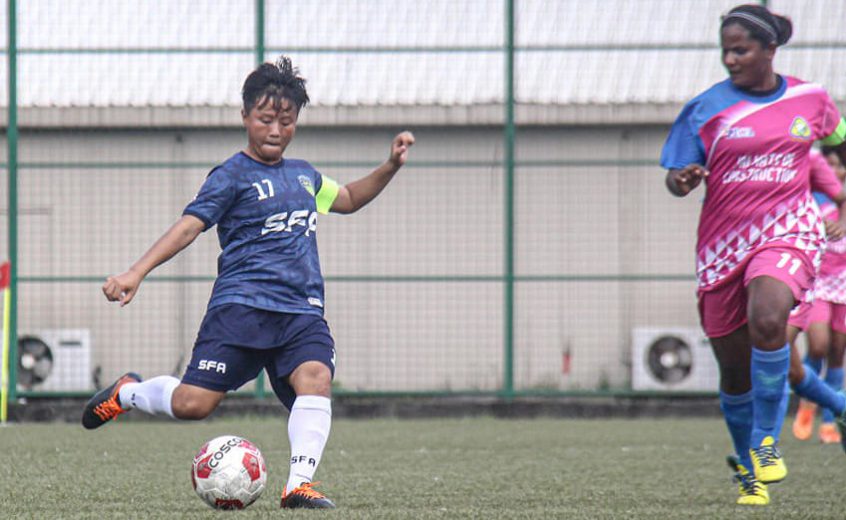 Mhasi belongs from the Falcon Captial of the World, Nagaland. One amongst the 8 beautiful states in the North-Eastern part of the country. Famous for the numerous tribes and several languages, Nagaland is home to around 20 lakh people.

Alongside music and dance, football is an integral part of their culture. Football being a much-favoured game in Nagaland, the sport witnesses numerous local tournaments every month, particularly in the state’s capital. However, women taking part in football is still at a nascent stage. Women up in the hills are renowned for their abilities with dexterity.

Albeit, Mhasi had her goals preset. Idolising the Argentine wonder man, Mhasi wished to resemble Messi on-field since age 8. In a state where women found it difficult to sweat it out on a football ground, Mhasi never felt troubled to pursue what she loves doing. “When I was young, I started playing with my brother and other boys in my village” reminisced the 21-year-old. In every child’s upbringing, the muddled puzzles are initially put into place by their parents. “My parents are very supportive and have played a pivotal role in shaping up my dreams. They love football and other sports. Both mom and dad are jovial about the fact that I have chosen football as a career. They make sure I never miss any opportunities coming my way” quoted Mhasi with a cheerful grin.

She joined a girl’s football academy in 2012 where her ambitions slowly started to take shape. With limited opportunities for football back in Nagaland, Mhasi did manage to play in the reputed Subroto Cup representing her school for three consecutive years.

Being a keen lover of the sport for 13 years, Mhasi got her breakthrough this year. She travelled from the Naga valleys to the City of Dreams, where she is battling to sustain her vision. Mhasi contacted Samuel Football Academy’s owner cum head coach – Daryl Samuel through facebook. “It was not difficult, I contacted Samuel Sir when I saw the IWL trials update on facebook. He was very supportive and encouraged me to come and play here without even seeing me play before” said Mhasi. Commenting on her new life in the vibrant city, “Yes, I’m enjoying a lot. Meeting new people and making lots of friends. But I miss my loved ones back home sometimes” replied Mhasi.

She further stated that women’s football in Maharashtra is very competitive. She kept reiterating how Daryl Samuel, the coach, has bettered her as a player. “My experience playing for Samuel Football Academy is good. Playing against such robust and technical players is a good experience for me. Samuel Sir is training me well and showing the areas for improvement. It has helped me a lot to perform in my matches”

Talking about the scenario of football in India, especially for women, Mhasi is content that they have a great future. With the U-17 FIFA Women’s World Cup knocking the doors, she can’t wait to witness the nation take part in the global stage.

Samuel Football Academy has qualified to the Super Six round with 13 points from 6 games in which Mhasi starred in the road to victory. If Samuel FA qualifies from this round, they will participate in the Indian Women’s League – the top division women’s professional football league in India.

“My future ambition is to become a good footballer and represent my state and country” concluded Mhasi Khonuo Paunuo, the sturdy midfield general, who scored 11 goals from 6 matches, averaging at a commendable 1.83 goals per game.

Kerala look to end winless run as Jamshedpur eye top spot
Thomas Dennerby: “Most of my players are technically good”