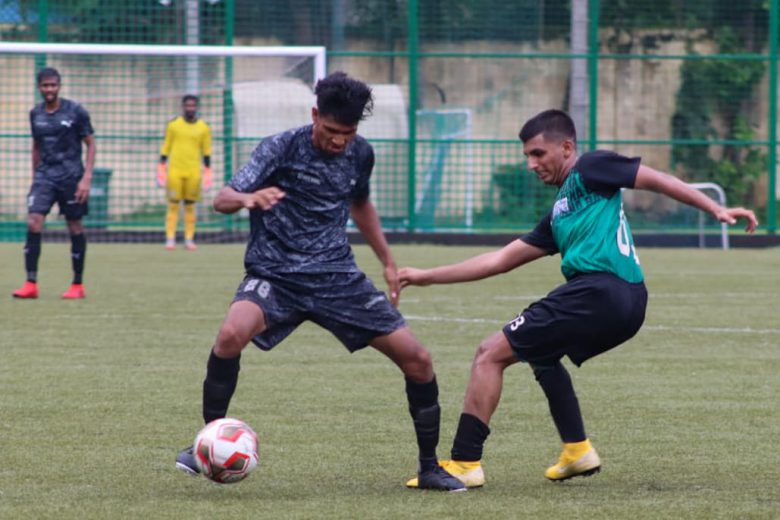 HDFC steamrolled past Bank of Baroda with a 5-1 win while Mumbai Customs beat Central Bank of India 3-1 to secure a quarter final spot from Group B.

The final matchday of Group B began with HDFC taking on Bank of Baroda in a deciding match for both teams. The match began with HDFC taking the lead within ten minutes when Pragnesh Solanki slotted in a cross from the right flank with ease. As the match progressed Bank of Baroda tried to gain control of the match but were punished by HDFC with three goals in a space of three minutes.On the 29th minute mark,Titus Uttankar scored the 5th goal for HDFC with a curling shot in the top corner of the match to put the game beyond Bank of Baroda.

The second half began with Denzil Mascrenas flicking a header beyond the HDFC goalkeeper to grab a solitary goal for Bank of Baroda. Yunus Ansari of Bank of Baroda was penalized with a red card by the referee in the closing stages of the match.

The match ended with HDFC  easing past Bank of Baroda 5-1 to progress through to the quarterfinals.

In the second half Customs came out as a completely different side with substitute Hekmat Singh combining well with the Customs forwards. Customs initiated their comeback with a goal by Hekmat Singh to level the scores. As the game progressed, Customs captain Praneel Mendon dominated the midfield and score his first goal of the match with a cracking finish to take the lead. Praneel was on the scoresheet once more,scoring a cracking long range goal to make the scoreline 3-1.

We will be fielding a full strength side in the quarters to defend our crown of champions of last season and looking forward to play to our full potential.

Mumbai Customs and HDFC progressed through to the quarterfinals of the Nadkarni Cup 2019 whereas Bank of Baroda and Central Bank of India bowed out.

Also Read: Century Rayon storm into the quarterfinals with a 3-0 win over Iron Born

Blue Tigers arrive in Guwahati ahead of Oman clash
Focus on keeping the ball and building up from the back: Blue Tiger’s new mantra