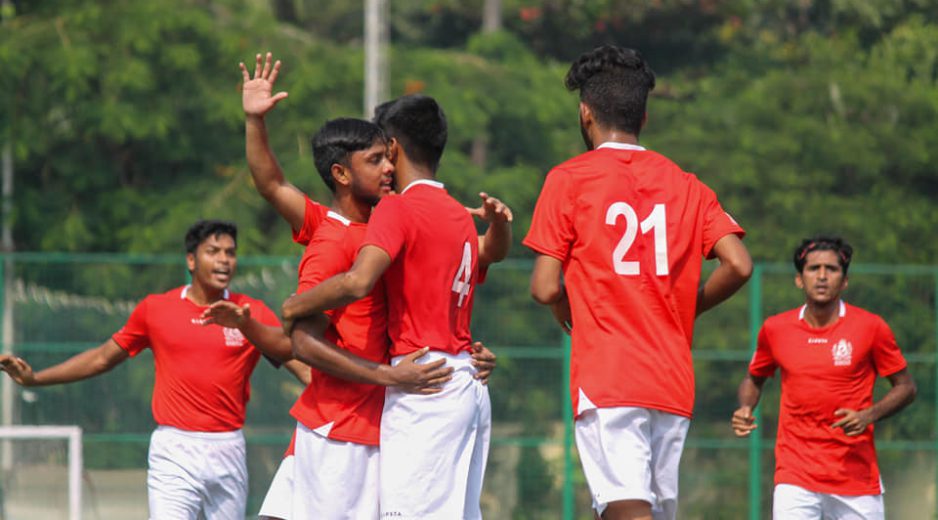 After two close losses, GMSC finally picked a win as they defeated a strong Kenkre FC 2-1 to pick their first points of the season

After a cagey start, GMSC took the lead in the 10th minute of the game, when a teasing cross from Shivanas Rao at the left wing found Harsh Rall whose initial attempt was blocked by Kenkre’s Shaun however the ball fell back to Harsh who made no mistake in dispatching the ball past the keeper in his 2nd attempt.

Kenkre soon began to assert their dominance on the field with some aggressive play and possession however profligacy upfront and a resolute GMSC defence meant they missed several chances. Minutes before half-time whistle, GMSC earned a corner and a mistake from Kenkre Goal keeper Adil Ansari, who fumbled a crossed from the Rabiul cost Kenkre the 2nd Goal. Both sides went into the half-time break with the GMSC leading 2-0.

In second half, Kenkre began positively in search of goals, GMSC were soon down to 10 men after a Referee gave the marching orders for a serious foul. Kenkre pulled one goal back after Dorain Pereira brought down Kenkre Striker inside the box. Yash Mahtre made no mistake in converting the spot-kick to make it 1-2 with 17th minute still left on clock. Kenkre soon had a golden opportunity to equalise after Arish found himself in a 1-on-1 situation, however the striker missed his chance.

In the end, despite Kenkre’s late offence on GMSC the defence held on to their nerves as the game soon ended 1-2 in favour of the latter.