Manvir Singh – “I gave my best whenever I got the opportunities.” 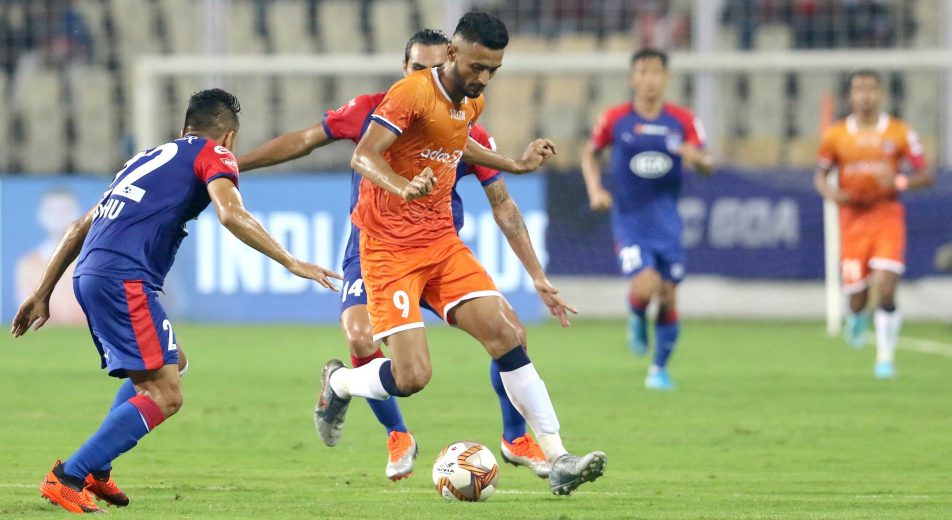 Manvir Singh rose from the bench to score a dramatic late equaliser for FC Goa against NorthEast United FC at the Indira Gandhi Athletic Stadium, Guwahati, on Friday.

In the three seasons that he has spent at FC Goa and played in the Hero Indian Super League, this was only his second goal. Manvir cannot be faulted since most of his appearances have been as a late substitute. Last season he made 19 substitute appearances off the bench, but this season things are looking up for the India striker.

He started the first two games against Chennaiyin FC and Bengaluru FC. He seemed to have done well, and even though he was relegated to the bench for the third game, his impact and last-gasp goal would have pleased coach Sergio Lobera.

“I gave my best whenever I got the opportunities. I even scored one goal last season and provided one assist. This year I started in the first two matches and both were great. In the third match against NorthEast United I came off the bench and scored the equaliser. I am very happy and I was waiting for such an opportunity to prove myself,” said Manvir.

It is no secret that Manvir’s centre-forward play has gone up a notch and he has reaped the rewards of being part of a squad that has a natural goal machine like Ferran Corominas.

“It is a big thing for me to play alongside Corominas as he is a very high-profile player. For the past two seasons, he has been the top scorer in the league. His decision making is very good and the touches he takes are excellent. It is a tough competition between me and Corominas and I try to give my best in practice sessions. Rest is up to the coach,” said Manvir.

He added, “Sergio Lobera plays a very important role in the club. His training is very good for every Indian player. His with the ball training gives you confidence.  He helps us a lot to improve our skills and abilities with his technical knowledge.”

When the opportunity presented itself, Manvir grabbed it with both hands and the young forward is pleased with the start to the season that he has had.

Against the Highlanders, Manvir did what Coro had done in the previous game. It was a penalty strike in injury time by the Spaniard that helped Goa hold Bengaluru FC last week.

“Even against Bengaluru, we were trailing by a goal. This has become a habit for us to score late goals and fight until the last minute. In football, a goal can come at any time. We never surrender and thus we got the results,” he said.

Having spent the last three years in Goa, the boy from Punjab has found immense satisfaction in playing in front of Goan football aficionados.

“I hail from Punjab, but it has been a great pleasure for me to play for Goa. All the fans here are great. They support you irrespective of results. Goa has a very knowledgeable crowd and gives us great motivation,” he said.