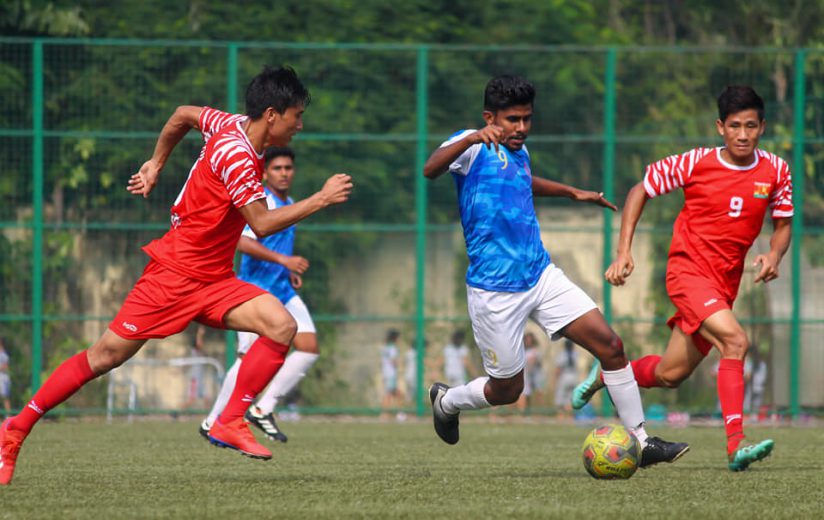 Playing their first game of the season, Century Rayon took the lead through Shahbaz Khan before UBI came back strong in the second half to turn the tables with two quick goals. But just when it looked like the bankers would run away with three points, a late injury time penalty ensured Century Rayon shared the spoils.

In the mid-afternoon encounter, both teams started out brightly with some end to end football however the hot weather meant the game slowed down a bit eventually. Century Rayon’s midfielder Thotchan Vashum and striker Sunil Mane created most of the chances and were a constant threat to UBI defence. As the game wore on, Century started to assert itself better in the game and were soon rewarded with a goal, when a miss pass from the UBI defence was capitalized upon by Shahabaz Khan. The striker won the ball in the middle of park and charged into the UBI defence beating the two Center backs before slotting the ball past the Goalkeeper to put his side into the lead.

Both sides entered the break with Century Rayon leading by a slender goal margin. Second half saw UBI coming out aggressively in search of equaliser. Minutes after the hour mark, UBI finally managed to break the Century defence after Kiran Gaddam’s swift turn and first time strike from the edge of the box found the back of the net.

The momentum had shifted and UBI were back on attack again as three minutes later, a through pass from the UBI midfield split the century defence. UBI’s no. 10 Athang Kanekar did well to cut in and beat the offside trap to find himself in an one-on-one situation with an onrushing goalkeeper. The Winger made no mistake in dispatching the ball past the keeper and into the net to put his side into the lead.

Rocked hard with two quick goals, Century responded well with couple of attack with Thotchan Vashum pulling the strings in the midfield; however UBI defence stood tall to deny them goals. But just when it looked like the game is headed in favour of UBI, a twist ensued.

In the first minute of injury time, a long ball from Century defender crossed over the UBI defensive line, the UBI defenders were caught off guard as Century’s striker chased the ball and found himself with just keeper to beat. Sensing the danger, the UBI Goalkeeper Manoj Gupte came out to clear the ball however it was too late as he ended up fouling the onrushing attacker. The referee Jagjeet Reen made no mistake in pointing out to the spot-kick which was well converted by Dinesh Singh to put Century Rayon on level terms.

The game ended with the full time score at 2-2 as both sides shared the spoils leaving the game with a point each.

In the private group of MDFA Elite Division, FSI Sea View succumbed to a close 2-3 loss against Iron Born-CFCI. Taking the lead through Bhupati in the 13th minute, FSI conced the equaliser minutes before half time when Aman Manghi’s strike found the back of the net. In the 2nd half, Runal Patel scored a brace for Iron Born while Tanmay Rai chipped in with one goal in between for FSI as the game ended in favour of Iron Born – CFCI