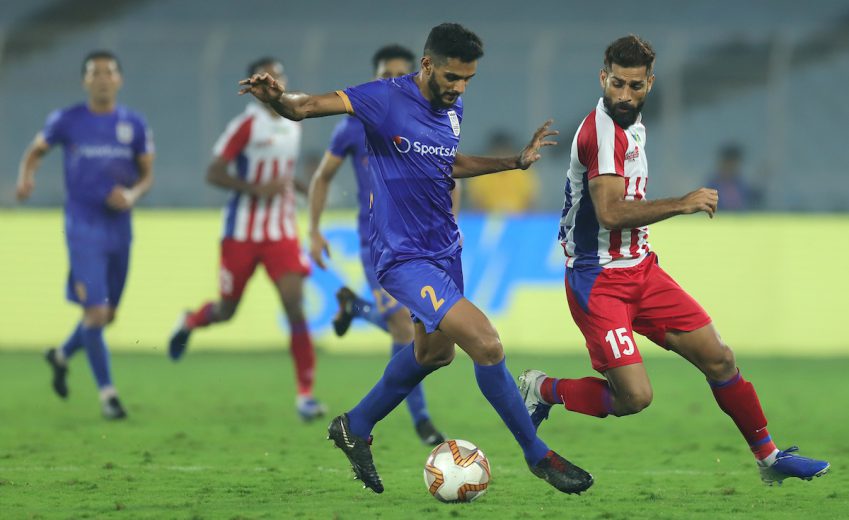 Michael Soosairaj put ATK in front which was cancelled out by Pratik Chaudhari (62′). Then it was Serge Kevyn (90+3′) who put Mumbai ahead only for ATK’s Roy Krishna (90+6′) to rescue a point for the hosts with a late goal.

It was a cagey start as the teams struggled to get a foothold in the initial stages. ATK could have drawn first blood in the 19th minute but a timely block from Rowllin Borges kept the scoreline intact. It all started with David Williams squaring the ball to Soosairaj who in turn set up Javi Hernandez. The Spaniard unleashed a shot at goal which went wide following a block from Borges.

Minutes later, Williams tried his luck from distance, but his effort went inches wide of the post. After the half an hour mark, Mumbai got their first opening of the match when Diego Carlos delivered a brilliant cross from the left for Modou Sougou, but the striker could not control the ball and the chance went abegging.

In the 39th minute, ATK finally breached Mumbai’s defence when Garcia produced a defence-splitting through ball to find Soosairaj who made a marauding run from his left wing-back position. The former Jamshedpur FC player then kept his calm and slotted past Amrinder Singh to put his team in front.

The hosts continued their domination in the second half and could have doubled their lead when Garcia’s cross was half-heartedly cleared by Pratik Chaudhari. The ball fell for Prabir Das, but the wing-back ballooned his shot over the crossbar despite having the entire goal to aim at. Around the hour mark, ATK were forced into a substitution when Carl McHugh landed awkwardly on his ankle while trying to win an aerial duel against Amine Chermiti.

Against the run of play, Mumbai City scored the equaliser, through a flag-kick in the 62nd minute. Paulo Machado delivered the corner near the first post and Chaudhari slipped his marker to head home his first goal of the season. It was end-to-end stuff after Mumbai equalised and both teams got notable goal-scoring opportunities. There was late drama in an intense match as both teams scored in extra time.

Mumbai scored first through Serge Kevyn, after Bipin Singh fired in a low cross from the left. But ATK responded with an equaliser almost immediately when Roy Krishna pierced the net at the other end making the most of a failed clearance from Sarthak Golui.