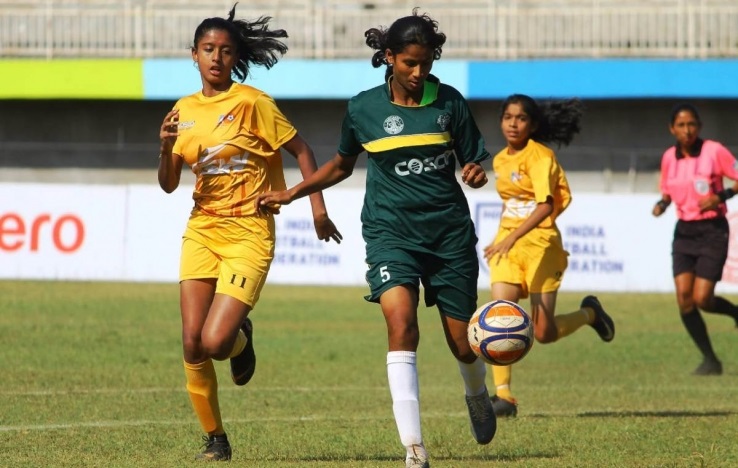 KOLHAPUR: The action continued in the Hero Junior Girls’ National Football Championship 2019-20 on the third day on Monday (April 22, 2019), with the second round of fixtures beginning for Groups A to D.

Tamil Nadu also made their way into the quarterfinals with a 2-1 win over Delhi in a thrilling encounter. After the first half ended goalless, Priyadarshini opened the scoring for Tamil Nadu in the 49th minute but it was cancelled out by Aveka Singh strike seven minutes later.

However, the winner came in the 74th minute through Mariyammal B as it secured the victory for the side from south India.

Manipur picked up their second win on the trot after a 4-0 victory over Goa, with forward S. Lynda Kom scoring a quickfire hattrick – grabbing goals in the 23rd, 40th and 46th minutes. Naorem Priyangka Devi added a fourth in the 49th minute as her team moves to the top of Group C.

In the other match, Tripura registered the three points after a hard-fought 1-0 win over a resolute Uttarakhand side. The match looked to be headed towards a stalemate but Anjali Debbarma scored from the spot two minutes from time to give her side the win.

Group D also saw one team emerge on top with six points from two games as Haryana made it two wins in two. Ritu (30′) and Kamna (41′) scored once each from the spot in the first half against West Bengal and skipper Raveena sealed the victory in the 81st minute as the scoreline finished reading 3-0.

Arunachal Pradesh were the other team in the group to pick up the win, with Kai Rumi scoring the only goal of the game in the 8th minute against Karnataka.

The fixtures for Day 3 (Monday) are as follows: