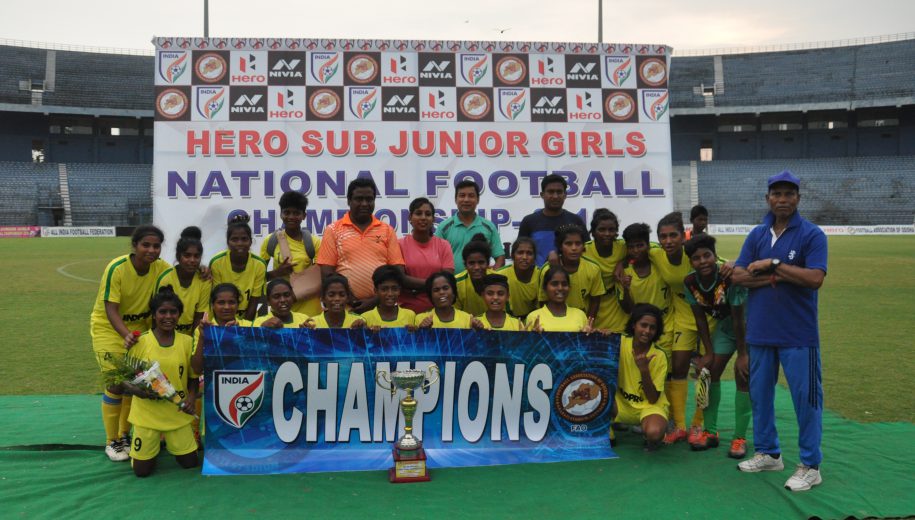 Jharkhand put four past Arunachal Pradesh in the final of the Hero Sub Junior Girls’ National Football Championship at the Barabati Stadium in Cuttack on Thursday (20 June, 2019).

Soni Munda and Basanti Lakra scored a brace each to help Jharkhand waltz to their first National Football Championship victory this season. Earlier this year, the state had also made it to the Final of the Hero Junior Girls’ NFC in Kolhapur where they lost to Himachal Pradesh.

Jharkhand got off to a quick start in the first half itself as they looked to use the width of the pitch to stretch the Arunachal defence. It took them only 15 minutes to break the deadlock, though. Forward Soni Munda made the perfect run in between the two Arunachal centrebacks, as she was played into the box before she placed it past the keeper and into the net.

Arunachal tried to get their game going but the Jharkhand defence kept cutting them off in the final third. Soon, Jharkhand doubled their lead through Basanti Lakra, who only had to tap it into the empty net after Arunachal keeper Bumpasai Manyu collided with one of the attackers.

The Jharkhand defence was at the top of its game on the day as they neutralised the threat posed by the Arunachal duo of Simran Zeeba and Tallo Ana. The former, who is the captain of the North-eastern side, had even released the latter, who is the top scorer of the tournament, with an aerial through ball towards the end of the first half, but it was expertly cut out by the defence.

Jharkhand captain Salina Kumari came into her own in the second half, chasing down lost causes which led to the third goal of the evening. The left winger hounded after a stray ball that was somewhat equidistant between the two Arunachal centre backs and the goalkeeper. She managed to get to the ball before the onrushing keeper and cut past her to expose an empty goal.

While the angle was too tight for Salina, she simply squared it across the face of the goal for Lakra to tap it into an empty net and score her second of the game. Arunachal did try to get some of their counter-attacks going through captain Simran Zeeba but the North-eastern side’s wingers Zila Kamchi and Bamang Yaro were played too narrow and were often crowded out by the Jharkhand midfield and defence.

The highest scorer of the tournament, Tallo Ana, was heavily marked and often had to drop deep into the midfield, in order to find space, which meant that Arunachal missed her goalscoring instinct up front.

Arunachal Pradesh Head Coach Kipa Bharat brought on Gumku Rani, while Ana operated in the hole. This freed up some space for the latter, who had the perfect opportunity to pull one back. With a little over 10 minutes of regulation time left on the clock, Rani played Ana through on goal, but the latter’s out-step shot lacked any venom, as Jharkhand keeper Jyotsna Bara slid in to claim the ball.

However, this push from Arunachal Pradesh came too late as they ran out of time. With just a few minutes of regulation time left, Soni Munda scored her brace, as she slipped the ball past the Arunachal keeper to make it four. There was no coming back from that, and Jharkhand ran away with their first National Football Championship title of the season.

Amigos Soccer school aims to lead in Mumbai grassroots football
Ahmednagar, Thane sneak through to next round of WIFA Women’s Inter-District Football Tournament