Jamshedpur down 10 man Goa at Fatorda 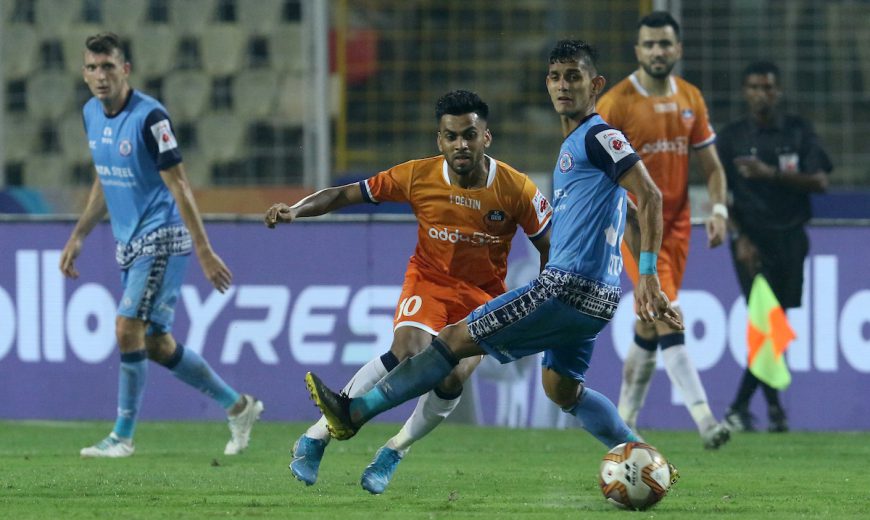 Jamshedpur FC returned to winning ways and handed FC Goa their first defeat of the season (1-0) in the Hero Indian Super League at the Jawaharlal Nehru Stadium here on Tuesday.

In a closely-contested match, Sergio Castel’s 17th-minute strike, his fourth of the season, proved to be the difference between the two sides. Castel climbed to the top of the goalscoring chart and Jamshedpur climbed to the second spot on the table with 10 points after five matches. Goa slipped to fourth and have eight points.

Goa were quick to take control of the game and threatened the visitors’ goal early on. Edu Bedia dribbled forward and released Jackichand Singh down the right flank before the winger’s powerful shot from a tight angle was blocked by an alert Subrata Paul. Jamshedpur found an opening in the 12th minute when Castel dropped deep to pick up the ball and found Robin Gurung’s overlap to his right. The full-back’s floating cross was met by CK Vineeth at the far post but the Keralite’s acrobatic effort flew wide.

Minutes later, the on-loan Atletico Madrid striker put Jamshedpur in the lead, utilising the open space in the hosts’ defensive third. The Spanish striker collected a Farukh Choudhary cross from the right, used his first touch to outfox Mourtada Fall in the box and confidently slotted the ball into the bottom corner. There were chances at both ends before the break. ISL debutant Jitendra Singh’s strike from distance was tipped over by Mohammed Nawaz and Edu’s glancing header was saved on the goal line.

Jackichand Singh continued to threaten with one cross after another from the right flank after the break but they were dealt with by the Jamshedpur defence. Brandon Fernandes attempted an ambitious curler from outside the box close to the hour-mark that failed to test the goalkeeper.

Goa continued to apply pressure in the attacking third and Jamshedpur’s chances had dried up. Edu fed Jackichand into the box and with the full frame of the goal in front of him, the winger blasted his effort over the bar.

Goa were reduced to 10 men towards the end of the second half when Ahmed Jahouh, who had picked up a yellow card in the fifth minute and was on a thin rope throughout the game, slid in late on Noe Acosta. The central midfielder was shown a second yellow, dealing a body blow for Sergio Lobera’s men.

Jamshedpur were clever enough to bring the tempo of the game down and consign a 10-man Goa to a defeat, sending a statement out to their rivals.