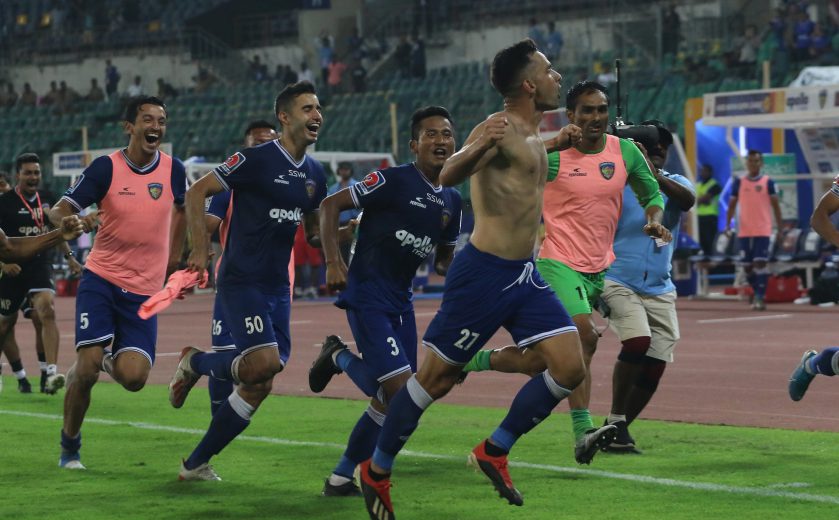 Chennaiyin FC registered their first win of the Hero Indian Super League season six in dramatic fashion after edging past Hyderabad FC 2-1 in injury time at the Jawaharlal Nehru stadium here on Monday.

After seeing poor finishing hamper them for most of the game, Chennaiyin thought they had the winner when Andre Schembri (90+2’) put them ahead in injury time. A few minutes later, Hyderabad equalised through Matthew Kilgallon (90+5’), but Nerijus Valskis sealed a sensational win seconds later, bringing the roof down in the stadium.

The win saw Chennaiyin leapfrog Hyderabad to the ninth spot while the ISL debutants suffered their fourth defeat in five games. The game got off to a scrappy start with neither side able to assert themselves in a frantic opening period. Chances fell for Chennaiyin but poor decision-making meant the scores remained level.

Rafael Crivellaro and Lallianzuala Chhangte found a lot of joy in the final third, often bypassing a disorganised Hyderabad midfield with ease. Chhangte was sent clear on three opportunities by Rafael, but each time the final delivery let the diminutive winger down.

Chennaiyin coach John Gregory was left fuming after Chhangte sent a close-range header agonisingly wide. It was one-way traffic, but the opening goal continued to elude Chennaiyin. Some good work from Anirudh Thapa saw Chhangte get to the byline. His eventual cutback found Thapa but his shot on the turn was kept out by a combination of Kamaljit and Matthew Kilgallon.

Despite the occasional forays forward by Hyderabad, the pattern of the game remained the same till the break with Chennaiyin spurning chances galore. Hyderabad did have a rare chance around the hour mark when Bobo slipped Marcelinho in, but his shot was parried by Vishal Kaith. Immediately at the other end, Kaith’s counterpart Kamaljit had to pull off a brilliant save from a vicious effort from Rafael.

The narrative of the game remained the same with Chennaiyin piling the pressure on Hyderabad, only to see opportunities wasted. Just as it seemed Chennaiyin’s goal drought would continue for yet another game, substitute Andre Schembri took matters into his own hands. The forward latched on to a cross from Edwin Vanspaul in injury time, held off his marker and fired a low shot past Kamaljit at the near post, registering Chennaiyin’s first goal of the season.

But there was another twist in the tale as Kilgallon headed in an unlikely equaliser from a corner in the fifth minute of injury time. However, Chennaiyin had one late salvo to fire. Schembri and Valskis combined to send the latter through on goal and he tucked in an excellent finish to send the home crowd into raptures on the stroke of the full-time whistle.