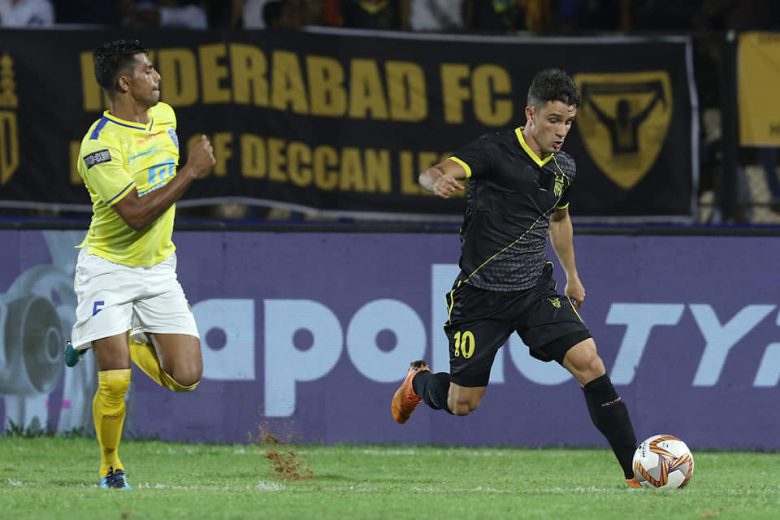 Hyderabad FC came back from a goal down to register their first win in the Hero Indian Super League as they edged past Kerala Blasters FC 2-1 at the GMC Balayogi Athletic Stadium on Saturday.

Rahul KP (34’) gave Kerala the lead in the first half but two second half strikes from Marko Stankovic  (54’) and Marcelinho (81’) sealed full points for the hosts with a delightful free-kick.

Kerala were jolted right at the beginning when central defender Gianni Zuiverloon picked up an injury. Raju Gaikwad made his debut for the club, replacing the Dutch defender.

The visitors were the more dominant side from the beginning and were close to breaking the deadlock in the 15th minute when young Rahul KP tried his luck from distance. But his effort flew just above the crossbar.

The hosts had a chance of their own when Marcelinho got to Rohit Kumar’s through ball inside the box. He twisted and turned in a bid to go past Mohammed Rakip, but the Kerala right-back stood firm and snatched the ball away from the Brazilian.

Kerala custodian TP Rehenesh almost gifted Hyderabad the lead in the 33rd minute when he failed to control Gaikwad’s back pass with his chest. Abhishek Halder was in position and tried to tap in but luckily for Kerala the ball went wide.

Hyderabad would regret that miss immediately. Rehenesh’s goalkick was unconvincingly cleared by Shankar Sampingiraj and the ball fell for Sahad Abdul Samad. The midfielder lobbed the ball for Rahul who found the back of the net with a first time shot.

Bartholomew Ogbeche could have doubled the lead in the 42nd minute when he received a through ball from Moustapha Gning and found himself one on one with the goalkeeper, but a heavy touch allowed Kamaljit to rush out of his line and collect the ball.

Hyderabad started the second half on a brighter note and came close to equalising in the 48th minute. Marcelinho created the chance with a brilliant run down the left flank and beat Gaikwad with pace before cutting in and squaring the ball for Robin Singh. However, the striker unnecessarily complicated an easy tap in and squandered the opportunity.

The hosts restored parity in the 54th minute when Gning tripped Mohammad Yasir inside the Kerala box to give away a penalty. Marko Stankovic duly converted the spot-kick.

At the other end, Hyderabad should have taken the lead in the 76th minute when Marcelinho received a through ball on the left flank. The Brazilian went past Jairo Rodrigues comfortably and attempted to curl the ball into the net at the far post but his shot went wide.

Marcelinho soon made up for his mistake by converting a classy free-kick in the 81st minute. The hosts were awarded the free-kick after Gning had brought down Nikhil Poojary with a poor challenge. The Brazilian found the back of the net with a curling left-footer to hand Phil Brown’s side their first win of the season.