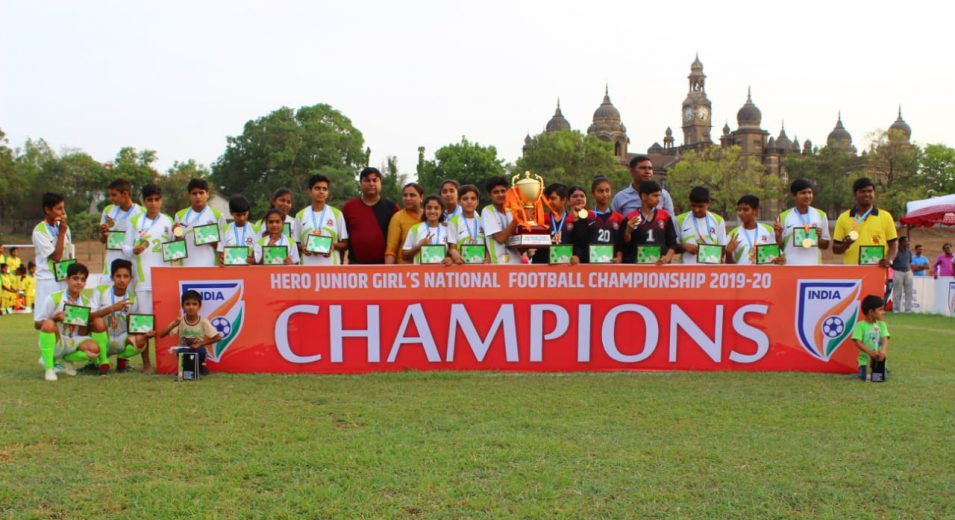 Himachal Pradesh were crowned champions of the Hero Junior Girls’ National Football Championship 2019-20 on Wednesday (May 1, 2019) after a 3-1 victory against Jharkhand in the final, that was held at the Polo Ground in Kolhapur, Maharashtra.

Anju, Kiran and Manisha found the net for the winners while Kuwari Indwar scored the lone goal for Jharkhand.

The match started off at a frenetic pace as both teams looked determined to open the scoring from the outset. Five minutes into the match, the deadlock was broken by Himachal Pradesh through skipper Anju, who made a well-timed run from midfield before collecting a through pass and flicking it past the onrushing goalkeeper. In the very next minute, Nisha almost made it two for Himachal with a vicious shot from the left flank that was brilliantly tipped over the crossbar by Jharkhand custodian Sandhya Toppo.

The save proved to be crucial as the scores were soon level in the ninth minute through Kuwari Indwar. The Jharkhand forward latched on to a loose ball inside the penalty area and turned swiftly to place the ball into the top corner and make the score 1-1.

However, Himachal restored their advantage in the 11th minute with one of the best goals of the tournament – scored by Kiran. Controlling a cleared ball outside the box, she brought the ball down and slammed it into the bottom corner with the outside of her foot, putting her side in the lead.

The teams headed for a cooling break midway through the first half and with that, the pace of the match also cooled down for a bit. Jharkhand missed a chance that fell to Sumati Kumari – the tournament top scorer and Himachal’s saw a free-kick of hers blocked.

A crucial moment came in the 33rd minute as Himachal scored their third goal of the game, immediately after a glorious chance for Jharkhand to equalize. Sumati appeared to be through but was denied by a last-ditch challenge and from the resulting clearance, Manisha stole the ball off the defence and raced on to goal and placed her shot into the net.

The second half, in contrast to the first, was a rather quiet affair as Jharkhand looked for their second goal to make their way back into the game. Pushing more players forward, they were left exposed on the break – giving Himachal a couple of opportunities to add their fourth.

The Himachal defenders stood tall and dealt with Jharkhand’s attempts to get past them with ease as the scoreline continued to read 3-1. However in the 69th minute, Sumati zoomed past the Himachal backline with a great turn of pace but lost her footing at the very last moment as the chance went begging.

In the end, Himachal Pradesh held on for the win comfortably and lifted the trophy.