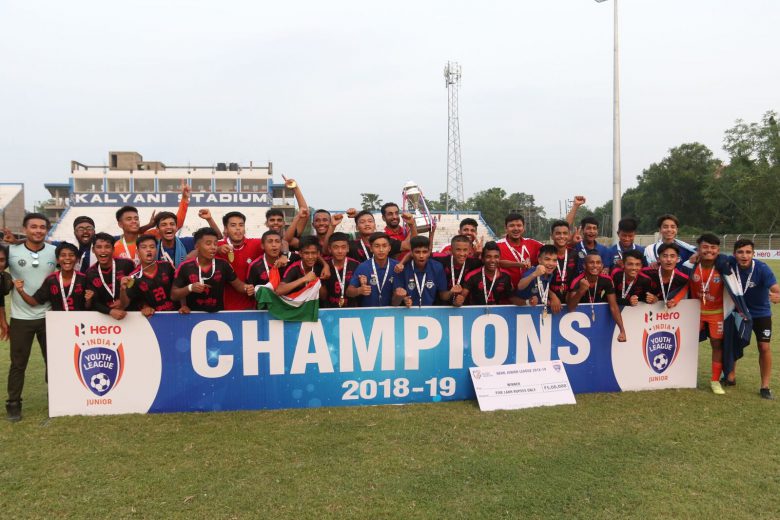 Minerva Punjab won their fourth Hero Junior League title in a row, after beating fellow finalists Bengaluru FC in the final at the Kalyani Stadium in West Bengal, on Wednesday (May 29, 2019).

India junior internationals Himanshu Jangra and Maheson Singh scored the two second-half goals for Minerva, who not only retained their title but also ended the 12-match winning streak of Bengaluru FC.

Contrary to the scoreline, it was Bengaluru FC, who got the match underway with the greater momentum, as they went in search of a goal that would break the deadlock. However, it was not all BFC, as Minerva also planned their counter attacks and tried to hit the team from the South where it hurt the most.

However, both the sides headed into the tunnel with the scores tied at 0-0 on the stroke of half-time. Minerva Coach Harpreet Singh’s half-time pep talk seemed to have worked perfectly as Minerva came out firing all cylinders. A couple of minutes after the restart, Jangra broke free of the defence and slotted it past the keeper to put Minerva in the lead.

That gave them more impetus, and it took them around another 20 minutes to double their lead. A cross from the right was headed onto a bar, before Maheson’s header on the rebound was blocked by Bengaluru keeper Dipesh Chauhan. However, Maheson was alert and nodded another rebound into the goal.

From then on, it was a frantic flurry of attacks by Bengaluru FC that were seen out by the Minerva defence. Minerva played on the counter and even managed to rattle the crossbar a couple of times. In the end, those two goals were enough to take the side from Chandigarh to their fourth successive Hero Junior League victory.

Also Read: Sunil bhai told me not to burden myself with any pressure: Michael Soosairaj

Sunil bhai told me not to burden myself with any pressure: Michael Soosairaj
Coach Stimac releases 6 more players from National Camp