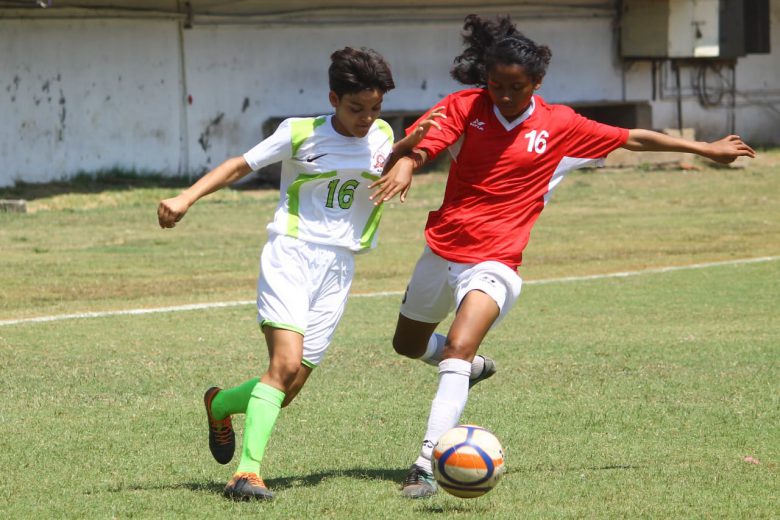 After a thrilling first day of action, the second day of the Hero Junior Girls’ National Football Championships 2019-20 in Kolhapur featured five games as the first round of fixtures in the group stages came to a close.

The first match of the day saw Odisha take on Chhattisgarh at the Rajarshi Shahu Stadium, which proved to be an absorbing encounter. Midfielder Laxmi Podiyami gave Chhattisgarh the lead in the 23rd minute but Manisha Naik equalized for Odisha just a minute later with a smart header.

Both sides continued to push for the crucial go-ahead goal and in the end, it was Odisha who prevailed 3-1 thanks to late goals from Jyoti Kumari and substitute Barsha Mahakud in the 72nd and 80th minutes respectively.

At the picturesque Polo Ground meanwhile, Bihar began their campaign with a 3-1 victory against Telangana. Kajal Kumari scored the opener in the 22nd minute for Bihar, which were followed by two smashing free-kicks from distance by Jyoti Kumari in the 47th and 79th minutes.

Ravali R did grab a consolation goal for the Telangana side in the 66th minute but in the end, it was Bihar who went to the top of Group F after picking up three points.

Semi-finalists’ from the previous edition, Himachal Pradesh picked up three points with a clinical display against neighbors Chandigarh in the first match in the group. A brace apiece from Manisha (12′, 14′) and Poonam (2′, 61′) put their team in the driver’ seat and captain Anju added the fifth in the 78th minute to set up a 5-0 scoreline.

Mizoram picked up three points in their opening clash against Punjab, scoring nine unopposed goals in the 90 minutes. Forward Lalrinmuani scored a first-half hat-trick (6′, 41′, 45′) while Lalnunsiami picked up a second-half brace (62′, 87′). Also adding their name to the score sheet were Vanlalnghaki (65′), K. Ngopaw Di (45+2′), captain Lalhlupuii Varte (10′) and Nancy Lalhlimpuii (57′).

The fixtures for Day 3 (Monday) are as follows:

Uttar Pradesh vs Jharkhand (Group A)

Delhi vs Tamil Nadu (Group B)