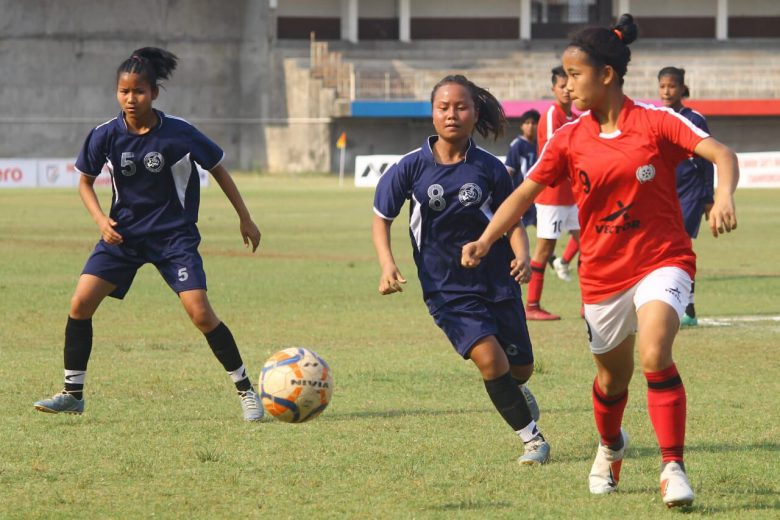 Two more teams made their way into the quarterfinals of the ongoing Hero Junior Girls’ NFC 2019-20 on Wednesday (April 24, 2019) in the form of Manipur and Haryana, with six spots out of eight now duly occupied.

Already out of contention, Uttar Pradesh picked up a consolation win against Jammu and Kashmir with the scoreline reading 6-0. Neha Kumari scored in just the second minute for UP, while Ankita Poddar grabbed a brace (31′, 48′). The 33rd minute saw a J&K defender score an own goal and Urvashi Sikarwar rounded up the scoring in the 82nd minute.

Delhi grabbed the bragging rights in the last Group B fixture to end their campaign with three points. Anaya Goyal put her side in the lead in the 33rd minute and after a see-saw battle, the side from the capital wrapped up the win through Aveka Singh, who scored from the edge of the penalty box in the 73rd minute.

Manipur made it three wins in three with a 2-0 win over Tripura, with both goals coming in the first half through N. Sibani Devi (10′) and S. Lynda Kom (16′). After two defeats in a row, Uttarakhand ended their campaign with an exciting 1-0 victory over Goa. As the match looked to end goalless, substitute Sakshi Negi burst past the defence in the 87th minute to score – much to the delight of her team.

Haryana also completed the perfect haul of nine points after a routine 8-0 win over Arunachal Pradesh. Skipper Raveena was the pick of the scorers – finding the back of the net four times (1′, 5′, 54′, 77′), with Rajni Bala scoring twice (48′, 64′) and Ritu and Shital also adding to the tally in the 45th and 85th minutes respectively.

West Bengal bowed out of the competition despite a 4-1 win over Karnataka, with goals from Arunabag (22′, 63′), Rupali Bauri (26′) and Piyali Roy (65′). Lekhasri VG grabbed a consolation for Karnataka nine minutes from time.