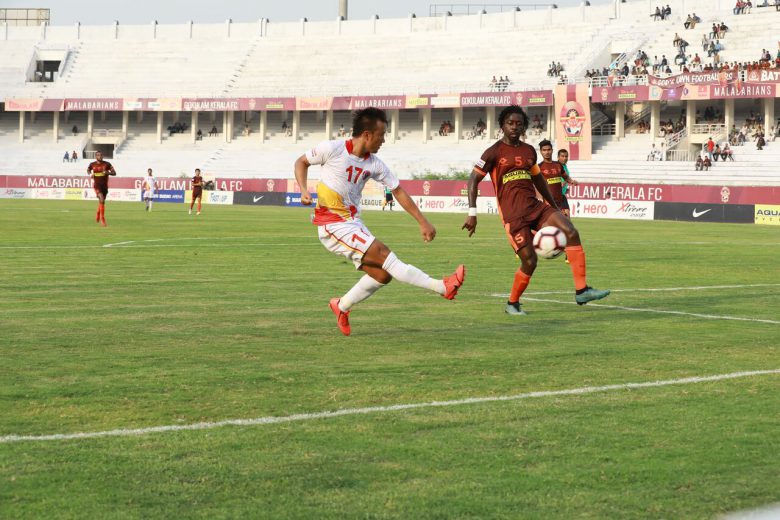 Kozhikode, March 9, 2019: 180 Kilometers further down south from Coimbatore in Kozhikode, Kerala, Quess East Bengal and their Spanish coach Alejandro Menendez Garcia knew they had to win and then leave everything else to fate.

The game began with The Red & Golds understandably on the attack and pressing hard to take an early lead. Their first attempt to score came as early as in the 2nd minute of the game, but QEB were unable to draw first blood.

As the half progressed, however, QEB looked more under pressure to score and the hosts slowly but surely began to take charge. QEB also showcased high quality in defence and along with some stellar goalkeeping by Rakhsit Dagar ensured that the hosts did not take a lead.

Gokulam came close to scoring on a couple of occasions, with the closest chance coming in the 39th minute, but an improbable single-handed save by Dagar ensured that Trinidadian striker Marcus Joseph was foiled from close. The half-finished goalless.

QEB began the second half stronger as well and a Didika Ralte effort in the 62nd minute hit the right upright. The hosts, however, stunned the visitors when Marcus scored a wonderful goal off a slick Gokulam move.

Arjun Jayaraj passed ahead to Emmanuel just outside the top of the box and the Nigerian’s deft backheel set Marcus on his way on the left. The Trinidadian drove inside and unleashed an angled left-footer beating Dagar all ends-up.

QEB then increased the pressure and 10 minutes later Jamie Santos Colado restored parity off a penalty and Danmawia then put the Red & Golds ahead in the 85th minute with an opportunistic goal.

However, those two goals were not enough till the end as Chennai City FC romped home to their maiden league crown with the 3-1 win over former champions Minerva Punjab FC in Coimbatore.

Also Read: Bagan go out on a high against Shillong