HERO I-LEAGUE: Bagan go out on a high against Shillong 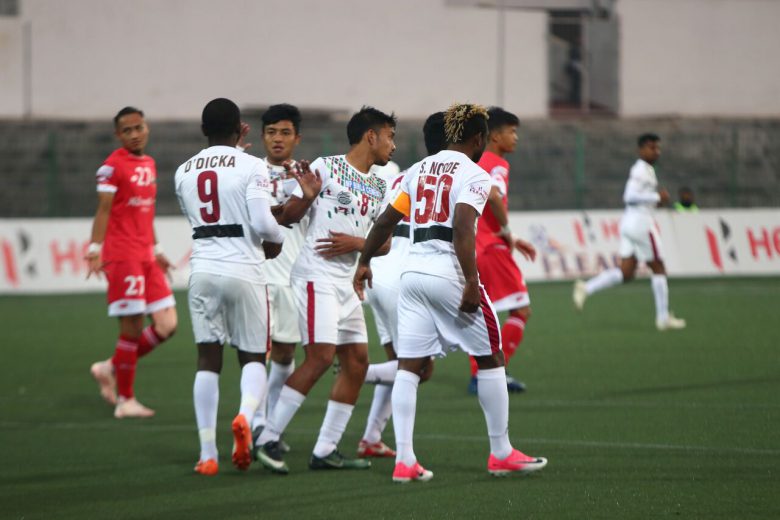 Shillong, March 8, 2019: The penultimate day of the 12th Hero I-league saw Kolkata giants Mohun Bagan snatch a 2-3 victory from Shillong Lajong FC. The game that was being played at the JLN Stadium, Shillong, saw the visitors draw first blood from Dipanda Dicka in the 4th minute through a penalty kick. Shillong restored parity with a penalty through Phrangki Buam (45’ + 1’).

The hosts then came back in the second half – taking the lead through Hero of the Match Buam in the 53rd minute, but an outsanding freekick in the 78th minute from Sony Norde saw the Mariners level scores. The Khalid Jamil-coached side struck back again through Britto in the 88th minute to finally seal the game in their favour. Mohun Bagan with this win finished their 2019 season at the fifth place in the 12th Hero I-League with 29 points to their kitty.

The game began with Shillong Lajong FC playing in Red while Mohun Bagan played in white. Visitors Mohun Bagan started the game on an attacking note but Shillong Lajong FC were equally agile not allowing the visitors an easy approach. The Kolkata giants made their intent very clear from the start building pressure on Shillong Lajong’s defence line and the effects were clearly visible when a miscommunication between Shillong’s defender Aiban and Goal Keeper Phurba Lachempa resulted in the latter receiving a yellow card and giving away a penalty kick to Mohun Bagan for a foul on Dipanda Dicka. The forward thereafter made no mistake in converting the penalty kick giving Mohun Bagan a very crucial lead in the 4th minute.

Shillong Lajong FC, despite the early setback, did not lose hope and kept trying to create chances but somehow could not convert any to their favour mostly due to the lack of a good finish. Though the Red Devils were the ones who had the lions share of the ball possession, it was Mohun Bagan who kept continuously pressing hard trying to double their lead. Dipanda Dicka along with Sony Norde made a few attempts but a more alert Lajong Defence ensured the visitors do not extend their lead any further.

The hosts, on the other hand, made some interesting attempts and nearly scored through Donboklang within the regulation time in the first half, but the woodwork played a spoilsport for them. They did not stop trying and were soon rewarded in the first minute of added time at the end of the first 45 minutes when a soft push from Arijit Bagui on Phrangki Buam inside the box saw the latter earning a penalty for the hosts. Buam thereafter made no mistakes in finding the much-needed equalizer for Shillong Lajong FC in the 46th minute, bringing the first half to an end.

The second half began with Shillong Lajong FC pressing hard right from the start. The combination of Donbokland, Buam and Mahesh kept making consistent attacks right from the start troubling the Bagan defence and results soon came their way when an inch-perfect pass from Donboklang to Pharngki Buam saw the latter make no mistakes in beating Shankar Roy to find the back of the net taking a crucial 2-1 lead in the 53rd minute.

Mohun Bagan, who were now trailing by a goal, shifted gears and increased the pressure trying to make opportunities to find an equalizer, but full credit to an alert defence of the Red Devils, the Mariners were unable to find a way to score. Mohun Bagan’s efforts for an equalizer gained pace in the second – last quarter of the second half and Britto’s introduction in the 72nd minute just added a lot of sheen to the combination of Sony Norde and Dipanda Dicka.

Results soon came when just six minutes later in the 78th minute Sony Norde showcased his class scoring an outstanding equalizer from a free kick which came their way after Freestar’s tackle on William was penalized just outside the box.

Jamil’s side then came back hard on the young Lajong Defence making a series of attempts but somehow could not finish to take the lead. Shillong, who made a few attempts through Buam and Donbok, could not find the right angle to redeem their state to take the crucial lead that they lost to a silly tackle. Mohun Bagan, however, found their way when Britto scored in the 88th minute on a rebound that was a result of a good save by Phurba Lachempa from a Dipanda Dicka attempt taking the scoreline to 2-3 in the Mariners’ favour.