Granatkin Memorial Tournament: India U19 to face Tajikistan in the 11-12th position play-off 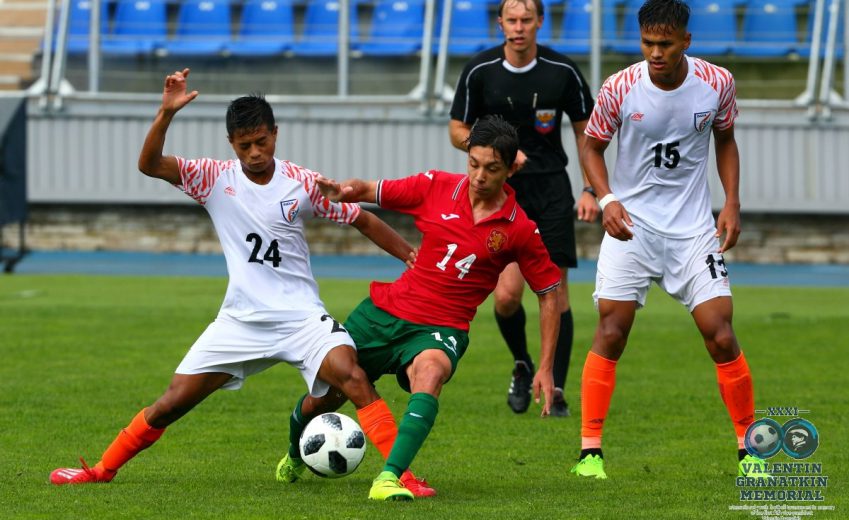 The India U19 National Team will clash against Tajikistan in the 11-12th position play-off of the Granatkin Memorial Tournament at the Turbostroitel Stadium on Thursday (June 13, 2019).

Tajikistan lost to Armenia 0-3 in the other play-off match on Tuesday to set a date with India, who lost to the Kyrgyz Republic in the penalty shootout after going down to ten men in the second minute of the match.

Coach Floyd Pinto believes that his team rued a number of missed chances despite dominating the game against the Kyrgyz Republic. Not only that, but they had a disciplined display overall and improved gradually from the first game against hosts Russia.

“Obviously, we are not happy with the result (against the Kyrgyz Republic). We played almost the entire game with one man down. Still, we created more chances and had we been able to convert those, we could have finished the game within 90 minutes,” he said. “We were very excited before the game and the boys stuck to the game plan. We dominated the possession and we have been doing that for the last three matches.”

Coach Pinto reiterated that facing another Asian country in the tournament will be a bonus for the team before the Asian U19 Qualifiers.

“We are facing our second Asian opponent in the tournament and it’s a bonus for us. We are expecting an almost similar game like the Kyrgyz Republic. We want to dominate the possession and create more chances than our opponents,” he said. “Once the strikers get the confidence of putting the ball in, the team will look much better in terms of results. They have been working really well and I hope they continue the good work against Tajikistan.”

He further said, “Tajikistan have some really good technical and physical players. We are expecting nothing less than a high-intensity game. The challenge is to convert the chances and keep a clean sheet. If we are able to do that, I think that’ll be the perfect way to end the campaign.”

Meanwhile, Ninthoi Meetei and Vikram Partap Singh will continue to sit out owing to their respective injuries, while Sumit Rathi is suspended for the Tajikistan game. Pinto didn’t hesitate to accept that the team missed Ninthoi and Vikram during the campaign.

“Ninthoi’s and Vikram’s injuries (during the second game) plagued our game-plan heavily. Both of them are penetrative, fast and mostly, they contribute to scoring goals and providing assists for this team. Now, the other boys need to step up in their absence and prove their worth. Although the game plan has stayed the same for us, Ninthoi and Vikram have been missed in the middle,” the Indian U-19 coach rued.

The match will kick-off at 02:30 PM IST and it’ll be streamed live on www.granatkin.com