Today, we pick a story of a talent who belongs to the world’s most militarized zone – Mr. Mehrajuddin Wadoo – a robust defender from the beautiful valleys of the Jammu & Kashmir. The former defender has decided to give it back to the beautiful game of football even after retiring from his professional stint.

In the lates 90s, when cricket was the most desired sport in the valley, Mehrajuddin’s father insisted him to pick a boot and kick a ball. Wadoo started at the tender age of 8. His father, Mohammad Sultan Wadoo, mentored him in his amusing footballing journey. Senior Wadoo back in his days was a renowned personality who played for J&K in Santosh Trophy.

Following his father’s footsteps, Mehrajuddin Wadoo went on to achieve the greatest milestones for his state. He came into limelight after he made tremendous efforts on the field. 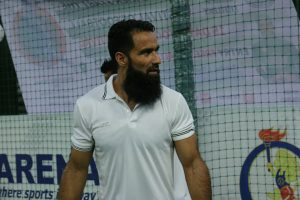 Finally, after making continued efforts, he donned the national team jersey in 2005. Ever since then, he has had an illustrious career with the national team till 2011, making 32 appearances and scoring 2 vital goals for the Indian football team.

Mehrajuddin kicked off his football career in 1997-98 as a striker when he had played for Iqbal Sports Club. But eventually, he emerged out as a solid defender. Since then, Mehrajuddin has plied his trade for clubs like Mohun Bagan, East Bengal, Salgaocar, Chennaiyin FC to name a few.

However, Mehrajuddin didn’t stop giving back to the beautiful game after he hung his boots. He is the U18 academy coach for the ISL based FC Pune City. Other than that, he has his own academy in Jammu and Kashmir.

The 35-year-old defender had an illustrious playing career in Maharashtra. He played for Mumbai City FC, Mumbai FC and Pune based Bharat FC. Working with the top clubs in Mumbai, he always wished to bring back the glory days of football in Mumbai.

He came up with the idea of starting his new venture, Wadoo Football School of Excellence. Not only has he had a rambunctious start to the academy, but he has also roped in a partnership with the CF La Nucia, a LaLiga Segunda B division club. The academy had its opening ceremony at the start of the month. The event was graced by the likes of the former Indian team player Mr. Yusuf Ansari, sports doctor Mr. Aijaz Ashai and ISL star Jayesh Rane. Yusuf Ansari showered praises upon the academy and wished Wadoo all the best for his upcoming endeavors. He also wishes to see this academy as the hotbed for exuberant talent production from Maharashtra. Similarly, Jayesh Rane congratulated Mehrajuddin for giving back to the game.

Wadoo Football School of Excellence has started to make an impact in Mumbai football. They first started with the free for all football programs and now came up with this staggering tie-up from Spain.

CF La Nucia was playing for the Spanish third division until the last season. They emerged champions in the last season and booked their spot on the LaLiga Segunda Division B. CF La Nucia were surely impressed by the potential of the growing Indian football market and made this investment. For the Indian youngsters, this is a considerable opportunity to get the needed exposure and adaptation to foreign coaching methods.

Wadoo has made his point very clear. He stated, “We don’t want the same kind of academy mushrooming here and there. We want to make a difference. My football school will do it to perfection by not only developing players but by developing good human beings”

Mr. Wadoo is famous for staying true to his words. We wish to see the former footballer produce excellent talents through his new venture.

Also Read:  DSPORT to broadcast LIVE the Round Two Draw for Asian Qualifiers to the FIFA World Cup Qatar 2022