Football is so beautiful that it can surprise anyone any day: Stimac 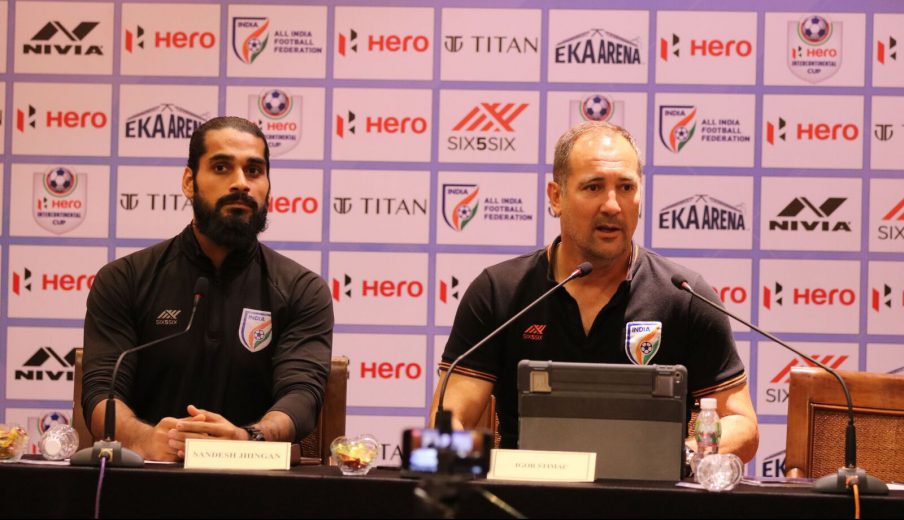 With the Indian Senior Men’s National Team all set to begin their Hero Intercontinental Cup 2019 campaign tomorrow (July 7, 2019) against Tajikistan, Head Coach Igor Stimac stressed that he is “looking to define the future of Indian Football.”

Speaking at the official pre-tournament press conference, Stimac, who had coached Croatia to qualify for the FIFA World Cup Brazil 2014 stated: “We have a new team and our focus is on progressing our game. We are here to win the tournament. But that’s not the first priority. I will not be putting too much pressure on the players for results. But will be looking at how the players respond to certain situations on the field.”

“The time we have to work is limited. We cannot afford to waste even a second. The fact that we gave so many debuts in Thailand (at the King’s Cup 2019) shows clearly that we are looking at the future of Indian football,” the Coach added. “We are one of the youngest National teams in the world.”

“We play football for the supporters, and even if results suffer, we will keep trying developing our style. We are placing faith and giving chances to young players with good technical abilities. I am happy that the players are learning very fast. The process will take time. I will do everything I can to make sure that we succeed,” he continued.

Jhingan echoed the coach’s sentiments mentioning the “supply of youngsters coming in is a major development for the National Team.” “The quality of the young players coming in is great. In defence, the likes of Anwar Ali and Narender Gahlot have come in, and have performed well. Over the last year, Anirudh Thapa has shown his quality in India colours and even scored at the AFC Asian Cup,” the central defender said.

The team headed to Ahmedabad on back of an intensive 10-day preparatory camp in Mumbai. “We had an intense camp in Mumbai where we had 17 sessions in 10 days. The whole team worked very hard and I’m proud of them. We are moving as per our plans and are on our way to becoming a strong force in Asia.” Jhingan reflected the mood of the players. “Everyone is very motivated. All of us were given certain plans, and the players we worked on them, which shows that each member of the team is up for the challenges that lie ahead.”

Stimac stressed that football can surprise anybody on any given day. “Football is so beautiful that it can surprise anyone any day. We hope we spring one such surprise.”

Meanwhile, the Blue Tigers arrived in Ahmedabad on Saturday afternoon to a warm welcome from fans at the airport, followed by a grand reception at the team hotel. Thanking the fans for their support, Jhingan urged them to come to the stadium and support the side. “We are always grateful for the welcome and want to reciprocate the affection on the pitch. Great days lie ahead for Indian football and we have to move together. I hope they will come out in large numbers to support us,” he stated.

Stimac urged the fans to turn up in large numbers. “We would love to see many fans at the stadium. Everyone who has India in their heart, and wants to see India at the top — we need your support

The match between India and Tajikistan will take place at the EKA Arena in Ahmedabad on Sunday and will kick-off at 8 PM IST. Tickets can be purchased at http://bit.ly/HICTickets. The match can be viewed on television on the Star Sports Network at SS2, SS2 HD, SS3, SS1 Hindi, SS1 HD Hindi, SS1 Tamil, SS1 Kannada, SS1 Bangla and Asianet Plus. It can also be streamed live on Hotstar and Jio TV.