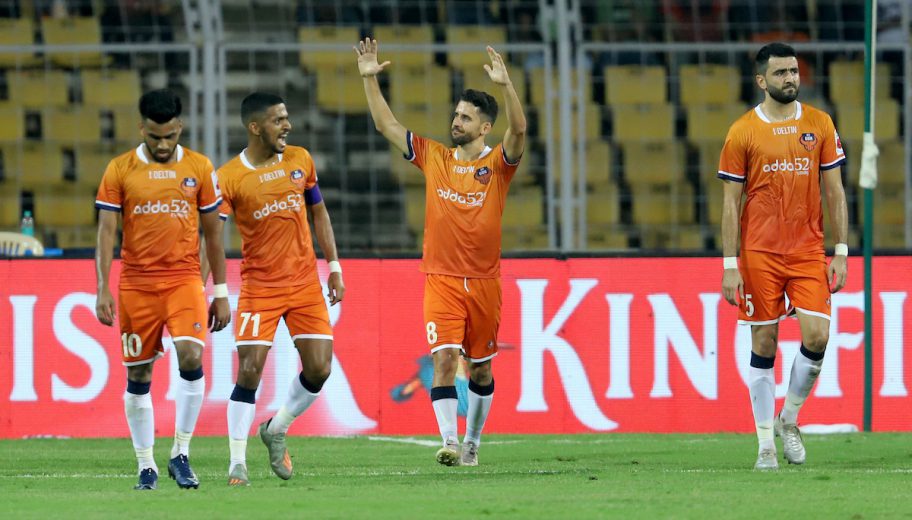 Coro’s brace and another strike from Brandon Fernandes was enough to seal the three points for Gaurs as they handed Odisha FC a 3-0 defeat to go on top of the Hero Indian Super League table at the Jawaharlal Nehru Stadium, Goa, on Sunday.

Goa began firing on all cylinders from the word go and they could have taken the lead with their very first attack of the match. Mandar Rao Desai crossed a delightful ball at the far post but Narayan Das was on his toes to stop the ball from reaching Jackichand Singh who was lurking behind him.

In the next minute, Hugo Boumous tried his luck from distance and Odisha were lucky to see his goal-bound shot miss the target by inches after taking a deflection off Diawandou Diagne.

Goa were rewarded for their efforts in the 19th minute when Coro drew first blood. Jerry Mawihmingthanga was robbed of the ball in his own half by Brandon, and he did well to find Jackichand Singh. The Manipuri winger produced a defence splitting through ball for Boumous who in turn squared it for Coro inside the box and the striker made no mistake to find the back of the net.

Lobera was forced into making a substitution in the 20th minute as Jackichand could not continue after injuring his ankle and Seiminlen Doungel was thrown into action. Odisha were struggling to play out from the back and turned over possession at frequent intervals as they were unable to cope with Goa’s high press.

Against the run of play, Odisha churned out their first chance of the match when Aridane Santana spotted a run by Guedes and squeezed in a superb through ball for him. But the Argentine’s poor first touch let him down and his subsequent shot from a tight angle sailed off-target.

Gombau made two changes at the break with Xisco and Gaurav Bora coming off the bench. He was also forced to use his third substitution in the 49th minute as Jerry came off worse after a challenge from Mourtada Fall. Odisha came close to drawing level in the 59th minute when Das’ inch-perfect cross was headed towards goal by Xisco but for an alert Mohammad Nawaz who pulled off a brilliant save to keep the scoreline unchanged.

At the other end, Arshdeep Singh did well to stop Doungel’s attempt  from point-blank range. However, it were Goa who scored the next goal. Brandon scored in the 85th minute with a long-range effort after Arshdeep failed to make a routine save.

In the 89th minute, Goa further extended their lead when Coro converted from the spot. The two-time Golden Boot winner scored his second of the evening after he was fouled by Aridane inside the box.