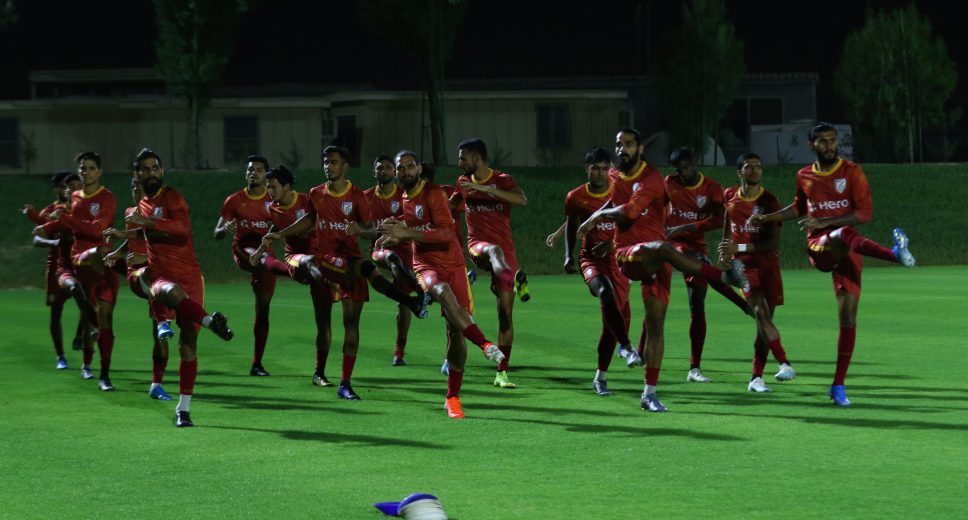 Coach Igor Stimac announced India’s 23-member squad for the forthcoming FIFA World Cup Qatar 2022 qualifier against Bangladesh which is scheduled at the VYBK Stadium in Kolkata on Tuesday (October 15, 2019).

Barring Sandesh Jhingan, who suffered an injury in the friendly match against Northeast United FC, and an injured Anwar Ali (Jr.), Halicharan Narzary, Farukh Choudhary and Nishu Kumar are released from the camp. The Blue Tigers will be arriving in Kolkata tomorrow (October 13, 2019).

“Halicharan, Farukh and Nishu gave others a tough run for money and the decision was not an easy one. They came very close to their competitors. It was in fact a tough decision to take,” Stimac explained. “Sandesh is our Iron-man. He’ll be missed in Kolkata but knowing him, I’m pretty sure, he’ll come back much stronger,” Stimac stated.

Meanwhile, Gurpreet Singh Sandhu, who stood tall against Asian champions termed Sandesh’s absence as ‘a big loss’ for the Blue Tigers. “It’s really sad. It’s a big loss for us, especially at this moment. I could imagine how would he feel missing this game but he’s a strong guy and he’ll come back strongly soon,” Sandhu said.

Adil, who has developed a strong partnership with Jhingan at the heart of the defence of late, feels Sandesh’s absence provides others with a chance to prove their worth in front of the Kolkata crowd. “He (Sandesh) plays a huge role in our team and he’s the leader in our defence. Now, the onus is on us to live up to the expectations. We want to win it for him,” Adil echoed.

Meanwhile, the Bangladesh team had a practice session in Kolkata in the morning, and experienced player Mamunul Islam dismissed theories that India will be handicapped by Sandesh’s absence.

“His absence allows the chance for others who will be playing their hearts out to prove to their coach that they deserve a place in the squad. I am sure India has able replacements,” Mamunul maintained.

The good news, however, stays that Rahul Bheke has improved fast, and Stimac applauded the medical team for it. “Credit to the Bengaluru FC and Indian National Team medical unit, Rahul (Bheke) is back on his feet. He’s a strong contender for starting the match against Bangladesh,” the 52-year-old coach commented.