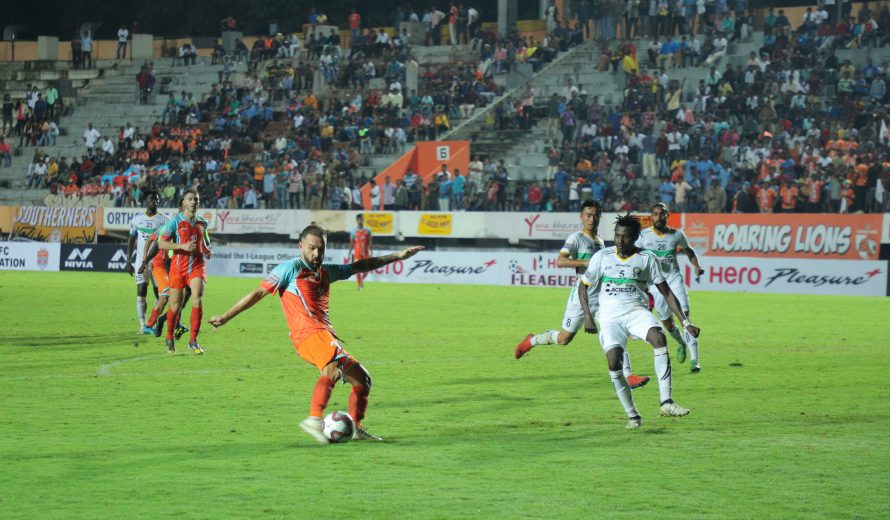 Defending champions Chennai City FC (CCFC) started their title defence in a solid manner as they defeated debutants TRAU FC via a solitary goal by Hero of the Match Adolfo Miranda at a rain-soaked Jawahar Lal Nehru Stadium in Coimbatore, on Sunday, December 1, 2019.

The match kicked-off with the defending champions and the debutants lining up in 3-4-3 and 3-5-2 formations respectively as both teams implemented major impetus on attack.

The first half started at a fast pace and TRAU got an early free-kick in the attacking third, but CCFC’s Roberto Eslava cleared the ball in the box safely. CCFC was building patiently from the back and their new signing Katsumi Yusa was already creating problems down the left flank with some skilful and deceptive movement.

The home side soon started showing their class as last season’s joint top scorer Pedro Manzi went very close to getting the team in front as his header went over the post.  With 30 minutes on the clock, it was an exquisite move by the defending champions as captain Manzi headed it straight at the goal post from a cross by Charles, but to the crowd’s disappointment, the ball didn’t go in.

In the dying moments of the half, Chennai again came close to scoring. This time, it was Katsumi, whose shot from close range on the near post went just wide. Despite Chennai’s dominance, the first half ended with both teams locked at 0-0.

The second half started similarly with Chennai City FC dominating the play. It was in the 49th minute, when the breakthrough came from a mistake by the TRAU defence, as a miscued clearance gave Chennai’s new signing Miranda an easy chance to tap it over the goal line.

Soon after, Chennai could have easily gone clear by two goals when a brilliant run by Katsumi led to an even better cross straight at the head of the unmarked Mashoor Shereef. However, poor finishing denied him of his first I-League goal as his effort went just wide of the post.

It was attack after attack by the home team, but Akbar Nawas’ charges kept falling short of adding to their lead. Goalkeeper Gurpreet denied Pedro Manzi his first goal of the season.

With 15 minutes to go in the match, TRAU made two changes in order to make things happen as they brought on Deepak Devrani and Abinash Ruidas. However, Chennai dominated the game till the end, coming close to scoring the second many times. TRAU somehow survived the scare.

Pedro Manzi could have closed the game once and for all in added time, but Gurpreet denied him once again, as he dived low at the near post to tip it away. CCFC finally wrapped up the game 1-0 to secure their first victory of the season.