Blue Pilgrims have a day out with Blue Tigers 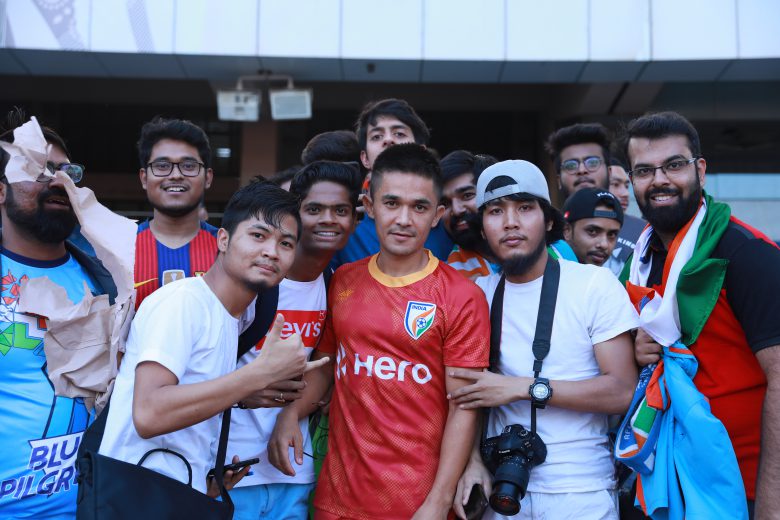 They say, a team is as vociferous as its fans. Be it the Barmy Army for the Three Lions or the fanatic supporters of the Die Mannschaft, they always stay behind their team through thick and thin, with just two words connecting them — ‘love’ and ‘passion.’

The undying love for their own team connects the supporters across the length and breadth of the country regardless of the result on the pitch. The energy that they bring in provides the team with an added motivation on the pitch — it’s mutual and contagious. A group of young energetic blokes, in an evening ahead of the FIFA U17 World Cup India 2017, sat down together to make something identical for the Blue Tigers, and hence, we saw the birth of the ‘Blue Pilgrims’ – the army behind the Blue Tigers – reflecting the emotion of 1.3 billion Indians.

As the Indian National Team sweats it out at the preparatory camp in the Capital, India’s newly-appointed Head Coach Igor Stimac, took some time out from his busy schedule to meet a bunch of enthusiastic pilgrims at the JLN Stadium in New Delhi on Saturday (May 25, 2019).

The Coach seemed quite overwhelmed having met the Blue Pilgrims, and didn’t mince his words thanking them for their support for the Blue Tigers. “Thank you for all your support. A Football team can never exist without its fans. I have been informed about the passionate Indian supporters and their enthusiasm has been incredible. I’d like to thank you on behalf of the team,” he said to the pilgrims. “This is just the beginning. We need to travel, and achieve our targets together.”

As the boys walked into the stadium for the practice session, the chants of the pilgrims reverberated around the stands. Sunil Chhetri was greeted amidst huge cheer, and the talismanic striker, in his signature pose, folded his hands to greet them. The 34-year-old stated; “It’s not only us who play the game. It’s also these people who represent India alongside us. They are our 12th man and we’re merely nothing without them. Thank you, boys and girls, for your support,” Chhetri echoed.

Another fan-favourite, goalkeeper Gurpreet Singh Sandhu reiterated that the team is nothing without its fans. “I feel it’s a collective effort. We’re no one without them. When we play our part on the pitch, they play an equally important role from the stands. The enthusiasm and passion they have shown over the years is simply inexplicable and I fail short of words thanking them,” Gurpreet maintained.

Sushant Yadav, an IT Professional clad in the Tricolour, was brimming with exuberance having seen his heroes warming up in front of his eyes. “We can’t express how much does it mean to us. It’s been an absolutely dream-come-true moment for me to see the Indian National Team practising in front of us. We thank coach Igor Stimac for allowing us,” Yadav’s voice choked. Lanky defender Sandesh Jhingan who led the team to the Hero Tri-nation Series glory welcomed more supporters to throng the stadiums in support of the Blue Tigers.

“Probably, we could not have achieved what we have achieved so far without the support we have got. Wherever we played, they have always been there with the tricolours, and that played a crucial role in our performances. We hope to see them in greater numbers in our upcoming challenges. Let’s overcome them together,” Jhingan quipped.

Aakash Yunas, a regular member of the Blue Pilgrims, who had travelled all the way to the UAE to support the Blue Tigers during the AFC Asian Cup earlier this year, also thanked coach Stimac for allowing the troop to the training session and meet the team.

“Blue Pilgrims have supported the Indian National Team through the thick and thin. On behalf of everyone, we need to thank coach Igor Stimac for taking his time out for us. We, on behalf of the 1.3 billion Indians, welcome him. We’re sure India Football will reach the next level under him,” said Yunas.

Pritam Kotal, the soft-spoken full-back was fully blown away by the “raw emotion” shown by the pilgrims. “Although only 11 of us get the chance to play for our country, it’s about all of the 1.3 billion Indians, and these folks have who display raw emotion towards us. Wherever we played, a few of them have always travelled to cheer for us. In one way or another, it has helped us feel at home and motivating ourselves to push more on the pitch,” Kotal explained.

The Blue Tigers are currently undergoing their preparatory camp at the JLN Stadium in New Delhi before flying off to Thailand to compete in the King’s Cup 2019. India are scheduled to face Curacao in their first match at the Chang Arena in Buriram on June 5.

Also Read: The most important thing is to be happy and in Goa, I am happy – Corominas

The most important thing is to be happy and in Goa, I am happy – Corominas
Igor Stimac releases 6 players from preparatory camp