Bengaluru FC title defence has got off to a slow start. 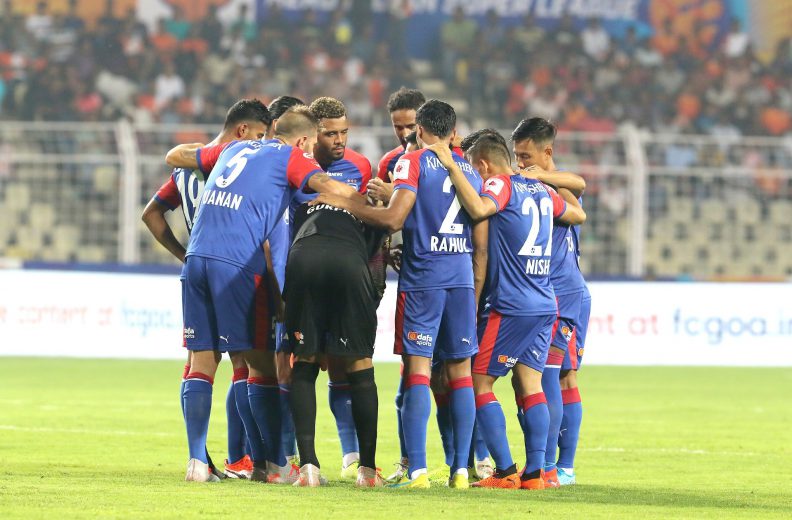 Bengaluru FC lifted the coveted ISL Trophy previous season. After a phenomenal season in yesteryear, team Bengaluru FC’s title defence has got off to an awry start this time.

The Blues picked up a third consecutive draw in as many games since the start of the season when they faced off against Jamshedpur FC at the JRD Tata Sports Complex on Sunday. The team had previously played out just five draws in their two previous Hero ISL campaigns combined!

The defending champions have not been without chances to score in their first three games. They have edged their opponents to be the dominant teams in those fixtures

“The team keeps drawing because we are playing against very good opponents. We try to work to get the goals. The good thing is that we are creating chances. We don’t have to feel the pressure, we have to keep working and wins will arrive,” said a defiant Carles Cuadrat.

From 25 shots so far (on and off-target), Cuadrat’s team has only produced one goal and that is a very unusual statistic for Bengaluru in Hero ISL. Only FC Goa have scored more goals than Bengaluru in over the last two seasons in the league, which begs the question as to why there’s been a lack of potency in the team’s attack.

While the arrival of Raphael Augusto and Kerala-born winger Ashique Kuruniyan have strengthened the Bengaluru attack, the latter has been deployed at an unfamiliar left-back role this season. But, Venezuelan striker Miku has been hard to replace.

Miku and Sunil Chhetri formed a lethal combination for the team during their run to the 2017-18 ISL final, scoring a large majority of the team’s goals. It was the same last season as well. Miku scored some crucial goals, ably supported by Chhetri as Bengaluru romped their way to the title. He scored 20 goals and had four assists in 32 appearances for the Blues. His incredible return made him the sixth-highest goalscorer in Hero ISL history, despite playing only two seasons. In fact, he missed a big part of 2018-19 season with an injury as well.

“Miku is always going to be a big miss for any team because he is a very special talent. But I think the team was able to create a lot of chances without Miku. We have been working on a lot of different things. We can manage the situation of creating chances with or without Miku,” said Cuadrat.

Miku’s replacement, 31-year-old Spanish striker Manuel Onwu, has big boots to fill. He hasn’t been able to make the desired impact leading the line for Cuadrat’s team and while it is too early in the season to come to a judgement, the head coach will be hoping his first-choice striker will step up and deliver in the matches to come.

Onwu will have no shortage of supply from the midfield and the flanks. While Chhetri is yet to get going, Udanta Singh has looked dangerous from the right flank and Augusto has slotted seamlessly into the role behind the striker. The presence of Dimas Delgado in midfield also ensures a steady supply of defence-splitting passes.

It is just a matter of the key players up front stepping up for Bengaluru FC. Chhetri has to have more of the ball in dangerous areas and Onwu needs to establish a better connection with his fellow attackers to ensure that the Blues finish the chances they create.

The rest of the league has improved and strengthened over the summer, with the likes of Jamshedpur FC and NorthEast United FC emerging as early season contenders for the play-offs. Sunil Chhetri and Co. cannot afford to fire blanks and drop more points.