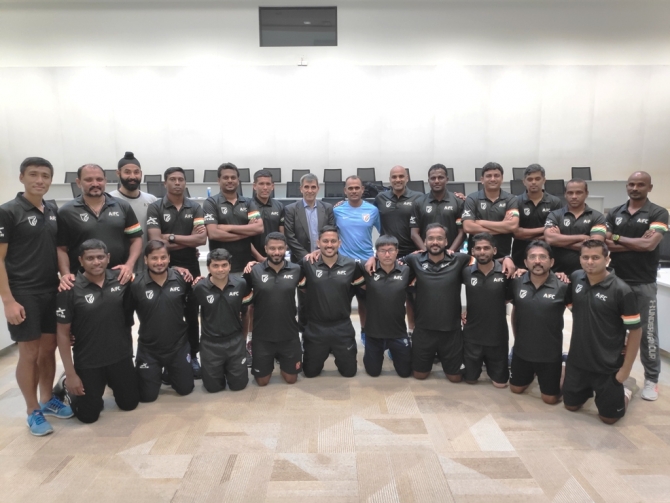 In what is a major shot in the arm for Coach Education programme in India, the Asian Football Confederation has provided the conferment of AFC Coaching Convention A Level to All India Football Federation.

Savio Medeira, Head of Coach Education, AIFF, felt “getting the AFC Convention approval itself is a huge honour.”

“Although the criteria for each diploma is provided by AFC, we can mould and design the courses to suit us. Now we can conduct and implement the way we want, and in view of our different culture and environment, this would be hugely beneficial for us,” Medeira, a former India International stated.

“Earlier, each MA would depend on AFC to send Coach Educators to conduct courses. Coaching convention will now enforce each MA to produce their own local Instructors, and get independent rather than being dependent on AFC for all courses,” Medeira added.

Mr. Kushal Das, General Secretary, AIFF said: “The AFC conferment is a huge honour for AIFF’s Coach Education Programme. We aimed at bringing in a holistic change to the Coach Education Programme, and AFC’s acknowledgement shows that we are on the right path. I congratulate Savio Medeira and his team for the hard work put in, and expect them to set higher standards.”

AIFF Technical Director Doru Isac felt “one of our major priority for football development in the country is the coaching education platform on theoretical and practical aspect.”

“I would like to take this opportunity to congratulate the former Technical Directors for their huge contribution in obtaining the AFC Coaching Convention membership, and special thanks to the Director of the Coaching Education and his staff for their consistency and perseverance in making happened,” he mentioned.

“This convention is giving us a tremendous opportunity to increase the quality of our coaching programmes and for AIFF is a very important benchmark to reach on the short time.”

Besides India, the AFC has currently provided conferment of the AFC A Level Certificate course to Iran, Jordan, Malaysia, Hong Kong, Philippines, and Bangladesh, while the Professional Diploma has been conferred to Australia, Japan, China, and Qatar.

“Our Coach Education in AIFF did take a turn for the better from the time Robert Baan was signed in as a Technical Director. He brought in major changes in the structure, and most importantly, instilled the belief that Coach Education is one of the main pillars in the development of Football in the country, a work which was continued by Scott O’Donell. But a lot is still left to be done,” Savio mentioned.

“The assessments were conducted in April by Wim Koevermans, and Kwok ka Ming. They looked at our delivery and conduction of theory and practical sessions, and the panel were overall happy in the manner we conducted our courses.  Here, I would also like to give a huge credit to Richard Hood who played a very important part in the compiling of the coaching convention process and continues to be of great support.

“The AFC believes Coaching Convention has been designed to help each MA to work towards developing their country’s football. AFC is concerned about the holistic change needed in Coach Education in Asia to bring in the revolution to get in closer to European countries in the development of Football,” Medeira informed.

“It’s now our responsibility to work towards making more strides in our Coach Education for our development, and to prove that the conferment was indeed beneficial. AFC will again review us in 3 years and if they feel we have not progressed, we can be downgraded. We will have to reapply within 3 months to get back the conferment.”

Meanwhile, praise also came in from former AIFF Technical Directors. Robert Baan, in a message to AIFF said: “It makes me proud that Savio was recognized by Wim Koevermans (Head of Coach Education AFC) and me as one of the ‘modern’ thinking Indian coaches. He accepted that the influence of foreign coaches was essential for the development of football in India. But at the same time the input of Indian Coaches was necessary.”

“Congratulations to Savio and his team for getting approval for AIFF to join the Coaching Convention. It is a huge achievement and one that shows AIFF leads the way in SAFF when it comes to Coach Education,” O’Donell quipped. “I know how hard Savio and his team worked to gain acceptance into the AFC Coaching Convention. I am sure they will continue to set high standards in order to continue educating and developing Indian Coaches. Bibiano and Floyd are excellent examples of what Indian coaches can do, if given the opportunities and support.