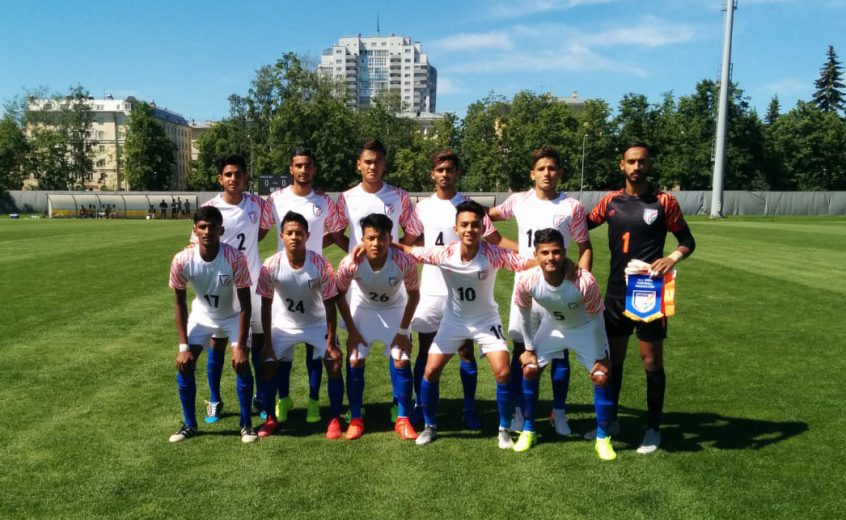 The Kyrgyz Republic pipped India in the 9-12th position play-off decider of the Granatkin Memorial Tournament in a penalty shoot-out at the Turbostroitel, St. Petersburg today.

After going down to 10 men in the second minute, India came out bravely to keep the scoreline unscathed in the first half. Akash Mishra (74′) opened the scoreline for India before Emir (88′) restored the parity two minutes to the end of the regulation time.

In the penalty shoot-out, Harmanpreet Singh, Sailo Lalchhanhima and Jitendra Singh missed the target while the Kyrgyz shooters were spot on to seal the fate of the game. Now, India will face the losers of the play-off match between Armenia and Tajikistan in their final play-off match to decide the 11th and 12th position of the competition.

Ninthoi Meetei, who sat out owing to an aggravated injury from the last match, was replaced by Harmanpreet Singh upfront beside Rohit Danu in the starting lineup. India suffered an early setback having gone down to 10 men in the second minute. On a corner, Sumit Rathi went for the header and in the process, fouled the Kyrgyz goalkeeper Artem Priadkin to put his team one man down.

India got their first considerable chance after the clock crossed the half-hour mark. Rohit Danu sprinted on his own to outpace the defender and roll it to Harmanpreet but before the latter could unleash a shot, Kyrgyz goalkeeper Artem snatched it from his feet.

India were showing their positive intent despite having the numerical disadvantage and were able to hold their fortress until the first half ended. Akash Mishra, the standout performer from the last match, came out with a wonderful opportunity to score his second goal of the tournament two minutes after the restart but the Kyrgyz goalie anticipated it rightly.

Prabhsukhan Gill was put under real test in the 70th minute but the calm-headed goalie collected the ball without much fuss to keep the danger away. Akash didn’t need to wait more to open the scoreline as he rose above the defenders to head it home in the 74th minute, adding to his tally in the tournament.

As India were inching closer to their first win, Emir put a heavy dent to their hope having scored the equaliser from the edge of the penalty area in the 88th minute. Aidar took it forward and put in a low cross for Emir, who found the net to send the match into the tie-breaker.

In the shootout, Rohit Danu started perfectly for India before Harmanpreet, Sailo and Jitendra’s efforts were thwarted by Artem to deny the Indians their first win in the tournament.