We plan to win each of these games: Constantine

National Coach Stephen Constantine said he has “broken things down and have set the plans to win each of these three games” in the Hero Intercontinental Cup. Constantine was speaking at the official pre-tournament press conference in Mumbai. 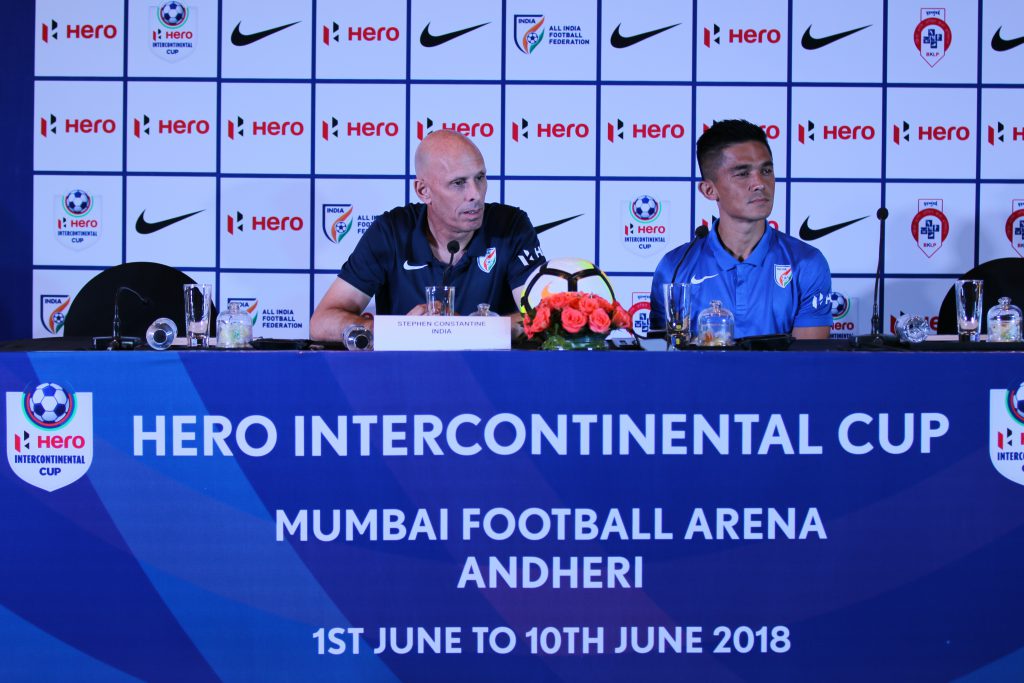 India take on Chinese Taipei in the opening match of the Hero Intercontinental Cup at the Mumbai Football Arena on Friday (June 1, 2018), the kick-off of which is slated for 8pm. Tickets are available at the box office counters at the venue and also online on www.bookmyshow.com

The match will also be telecast live on Star Sports HD2, Star Sports, Hotstar and Jio TV. “We will use this tournament as a preparation for the AFC Asian Cup. I am aware of the quality of the players whom Kenya and New Zealand have brought in and they are playing all across Europe.”

“The quality of those leagues matter. We are using this game to develop and improve,” the Coach added. “Kenya and New Zealand will be giving us different problems and we need them in our developmental process. Physically we are prepared and we need to now prepare tactically.” Team Captain Sunil Chhetri, also present on the occasion mentioned ABOUT the “desire to win among the players is 100 percent.”

“It’s an absolute honour for me to have played for my country. I have been involved with many coaches, players, physios and staff. I love playing for India and will give my best what I can. I am fully fit.”

“It was mixed bag when he first arrived for the Camp. There were players some of whom hadn’t played for almost a month while there were some who joined the Camp straight from an AFC Cup match. But we are ready.” Chhetri who stays two matches short of becoming the second-ever Indian player to play 100 International matches after Bhaichung Bhutia opined there is a lot of “awareness” among the players since he first started off. “The present generation is much more aware. The boys have more knowledge of what to do and what not to. They are willing to take care of themselves and their nutrition,” he stated. Constantine made a mention of the two new support staff – Joel Carter and Claus Peeterson.

“Claus works with individual players who are not quite ready. He is a rehab specialist and the players really enjoy and need the session,” Constantine informed. “Carter is doing match analysis and is a coach in his own right. We have broken down our opponents. We have had separate sessions with individual players and are looking at the video clips both from matches and training sessions to get better.  I need to thank AIFF for allowing me to do this.” Referring to the “programme coming up” Constantine felt there is a “lot of Football to be played between now and the Asian Cup.”

“We have quite a programme coming up. We have the Asian Games, the SAFF Championships, the October and November windows. It’s quite a busy schedule. There is a lot of Football to be played between now and the Asian Cup. “I have 11 U-23 players in the squad but we also need the senior players lead, guide and mentor these players,” he pronounced.

“It’s all about performance, work. It doesn’t matter whom we play. Whoever is in front of us is the team we need to beat. There is much more awareness about the game from the general public. But I think in the last 4 years we have taken it to a new level. We need to continue the momentum and qualify for tournaments like the Asian Cup on a regular basis.”

Also Read: We all are confident to shoulder responsibility & deliver as situation demands: Jeje