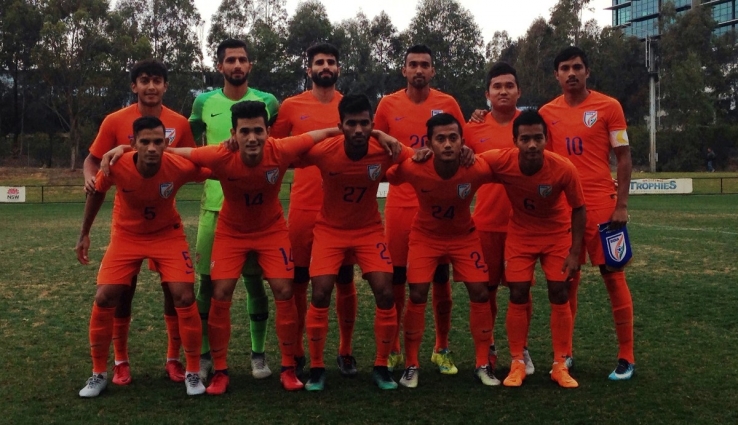 A first-half header from Sajid Dhot and a sublime brace from Sumeet Passi ensured a 3-1 win for India against APIA Leichhardt Tigers FC U20 side in a friendly fixture played in Sydney today (August 25).

After APIA Tigers boys scored the opening goal of the match in the 27th minute, Sajid Dhot (35′) took India back into the game having scored the equalizer 8 minutes later. After the changeover, Sumeet Passi (47′, 57′) struck twice within 10 minutes to steal a victory in the first friendly fixture played Down Under during the ongoing exposure trip.

Coach Stephen Constantine featured an all U-23 side except Sumeet Passi who was donning the captain’s armband for the country for the first time.

The match was evenly poised between the two sides until the hosts earned a free-kick at the top of the box and they did no mistake to make the most of it to go 1-0 up in the 22nd minute.

Five minutes later, Passi found the back of the net but he was ruled offside by the official. But, India didn’t need to wait for more as Sajid Dhot headed a cross from Zuala home to send the Indian dugout in a rupture in the 35th minute.

After the changeover, India changed the gear quickly and got into the lead within less than two minutes. Ashique Kuruniyan floated in a long ball from the left wing and Sumeet Passi connected it beautifully to stun the APAI Tigers FC goalkeeper in the 47th minute.

Germanpreet Singh tried to add more to take the lead beyond APIA Tigers FC’s reach but his long-ranger sailed over the crossbar five minutes later. Passi completed his brace in the 57th minute when he converted a cross from Nikhil Poojary meticulously to take the complete control of the game.

The hosts tried tooth and nail to breach the Indian defence but the resilience shown by Indian defenders were enough to keep them at bay till the final whistle. Coach Stephen Constantine sounded extremely positive following the win and he tagged this game as ‘a good one’ before confronting with Sydney FC three days later.

“It was a good physical game against APIA Tigers U20s and obviously it was a good game for us leading up to the Sydney FC game on 28th”, Constantine said after the game.