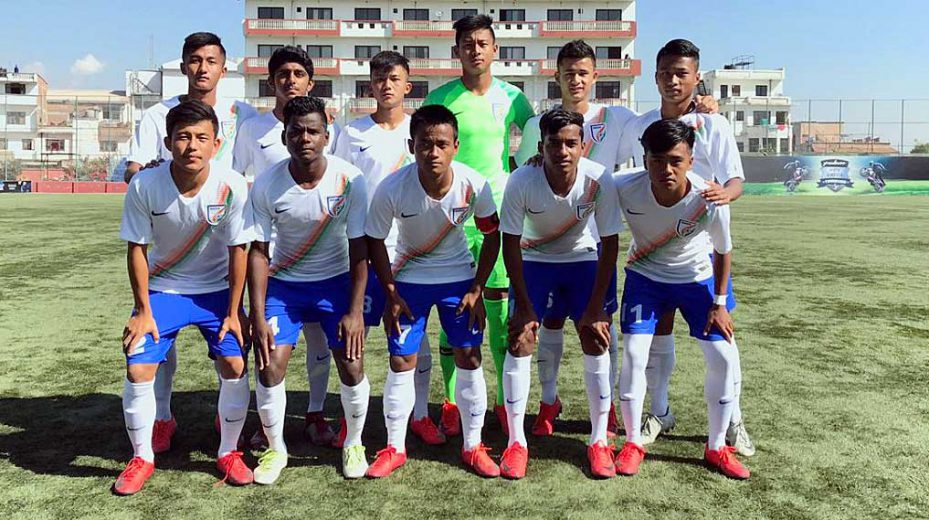 NEW DELHI, 3rd November 2018: The Indian U-15 team recorded a routine 1-0 win against hosts Nepal at the ANFA Complex in Kathmandu on Saturday (November 3), with a first-half strike from Thlacheu Vanlalruatfela enough to see them secure victory in the third-place playoff at the 2018 SAFF U-15 Championship.

The first half of the game was a rather quiet affair, with both teams not creating many chances and India entering the dressing room with a one-goal cushion. The start saw the two teams locked in a battle for possession and territory in the middle of the pitch, with the away side having a clear upper hand.

The goal came in the 18th minute through Vanlalruatfela, who scored after some nice build-up by his teammates. After exchanging a few passes in the final third, the forward was played in on goal and found himself one-on-one against the opposition goalkeeper.

Pushed wide, Vanlalruatfela showed great composure and poise to turn and aim for goal. Without wasting any time, he slammed the ball past the keeper and into the roof of the net to give the Indians the lead.

Nepal looked to strike back but were struggling to create chances and keep possession in dangerous areas as the Indian team stood firm and forced the hosts to go for long-range efforts, which were easily dealt with by Indian keeper Santosh Singh.

The Indians could have had a second goal in the 42nd minute but the Nepal custodian dived sharply to his right to produce a fine save and divert the Indian shot for a corner.

The second half saw Shuvendu Panda’s boys keep their lead intact. The Indian defence remained largely untroubled and kept the Nepal attackers at bay, with Santosh being called into action once and captainJongte Lalpekhlua playing a dominant role in the middle of the park.

Nepal had a half-chance in the 72nd minute but the first-time shot from a long pass by their forward did not get the required connection. Nine minutes later, the Indian keeper pulled off a fine save as he denied the hosts from close range after a melee in the penalty area.

India’s best chance came in the 77th minute after a free header from a corner sailed narrowly wide. In the end, it was enough to see them clinch the bronze medal at the tournament as they held on comfortably for the win.

Also Read: Soosairaj stars with brace as Jamshedpur give Goa a taste of their own medicine