Income Tax raids harsh on Soccer XI; scores 5 past them! 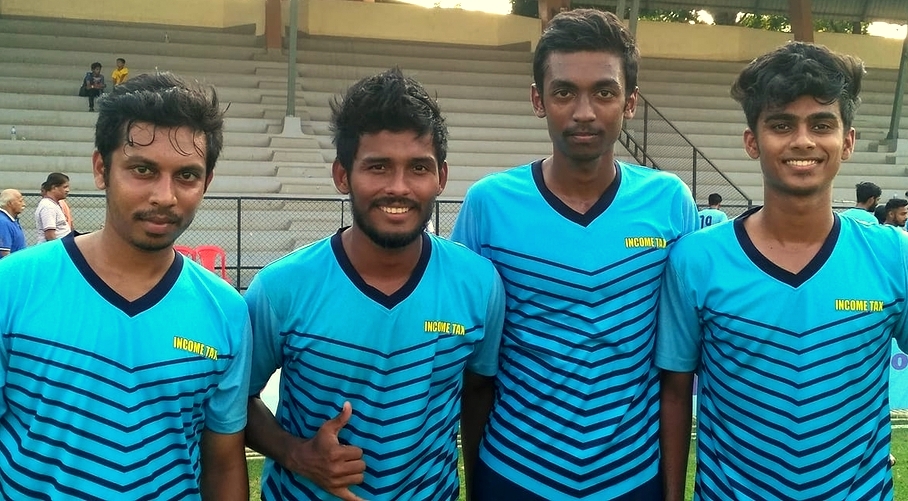 11th April’18, Mumbai : On a Wednesday afternoon a spirited first half show by Income Tax saw them register their first victory of the campaign against Soccer XI, here, at Mumbai Sports Arena. This was a crucial tie for both the sides as none of them saw the face of the victory till then, and wanted a win, desperately, in order to get away from the relegation zone.

Income Tax scored four times in the first half through Ajinkya Hatkar, Silverster, Meghraj Kuvar and Sanket Rane . While Silverster added to his goal tally in the second half, Soccer XI managed to salvage some pride after Satish Thevar scored a 90 minute consolation goal as they became the highest conceding side in Super Division; conceding 29 times in 6 matches, losing 5-1 eventually.

The group C match started with both the teams trying to break the shackles of winless runs and started positive, looking for an early goal. Income Tax came agonisingly close to open the floodgates in the 2nd minute of the match when Silverster’s powerful header rammed into the right post after a corner taken by Suresh Kapadia. 8 minutes later Soccer XI’s Nitesh More had put the ball into the back of the net only to see the linesman holding his flag up for an offside.

Income tax broke the deadlock in the 23rd minute after wasting way too many chances upfront; when Chetan Jagnade laid off a nice forward through for Ajinkya, and the talented striker took a nice little run upfront, beating the Soccer XI centre back Nehal, for the ball and made onrushing goalkeeper go the wrong way as the striker exuded a clinical finish into the left bottom corner.

Chetan Jagnade continued his penetrating through balls and passes to create mayhem in the Soccer XI defense as it was again him who initiated the movement for their 2nd goal. Meghraj Kuvar embarked on an incisive run through right after getting the pass from the middle and delivered a perfect low cross to Ajinkya who was being covered by both the centre backs. Ajinkya slipped but the ball found Silverster who blasted into right bottom corner with his second chance, doubling the lead within first half an hour of the game.

Up by 2-0 Income tax started raiding their opponent box more than often and soon struck two more goals in mere 3 minutes making it 4-0 from 1-0 within 4 minutes. In the 32nd minute they made it 3-0 through Meghraj Kuvar who tapped in the ball into an open net after Raj Trivedi did all the hard work, dribbling past the defenders and goalkeeper near the touchline and managed to produce a weak minus from a narrow angle.

A minute later Meghraj returned the favour to Sanket Rane when he directed a lob towards the intelligent midfielder who took the run and placed the ball into an open net after going past the Soccer XI custodian with a simple, yet a deft touch to make it 4-0.

Income tax could’ve scored another one when Raj, rampaging through the right, played a brilliant square pass to Mejraj who was at the fault of taking too much time to shoot and had Soccer XI goalkeeper inflict a fine save coming off his territory as the whistle for break went off immediately.

Down by 4 goals in the first half Soccer XI didn’t display any improvement in their immobilised midfield as Income Tax continued to waste many more chances. In the 60th minute Arham Patel came in for Soccer XI’s Anuj Kumar while Mejraj made way for Shubham Patekar in the Income Tax half. Ajinkya , the Income Tax striker continued to threaten the Soccer XI backline but was at fault for wasting too many chances including a couple of one-on-one situations. Ajinkya was finally taken off with 15 minutes remaining after sustaining a leg injury as Shelton Fernandez graced the pitch in place of him.

A minute later in the 76th minute Silverstar completed his brace and his team’s fifth goal of the day when he received a nice cross from the corner, at the middle of the box, and gave Soccer XI’s custodian no chance whatsoever as his shot settled into the right bottom corner to push their opponent deep into the relegation threat.

In the 90th minute Sathish Thevar scored the only goal for Soccer XI in a bizarre manner as he shot from the half line which sailed over the experienced Income Tax custodian into the top net to give his side something to cheer about, who were without their regular first choice striker and the centre back.

This win will surely be a morale booster to a struggling Income Tax squad which lost 4 of their previous matches to find themselves in the relegation spot. They now have 3 points from 5 matches and stay tied with Kenkre U-19, who are above them, courtesy goal difference margin. Soccer XI will have to hope for a miracle in their last match as they look certain to get relegated after their 6th loss in as many matches