Perhaps it was his destiny, or perhaps it was the moment or perhaps it was written in the stars. In his 100th International match, Sunil Chhetri scored a brace to lead India to a 3-0 win over Kenya in India’s second match of the Hero Intercontinental Cup at the Andheri Sports Complex in Mumbai, Maharashtra today (June 04, 2018). 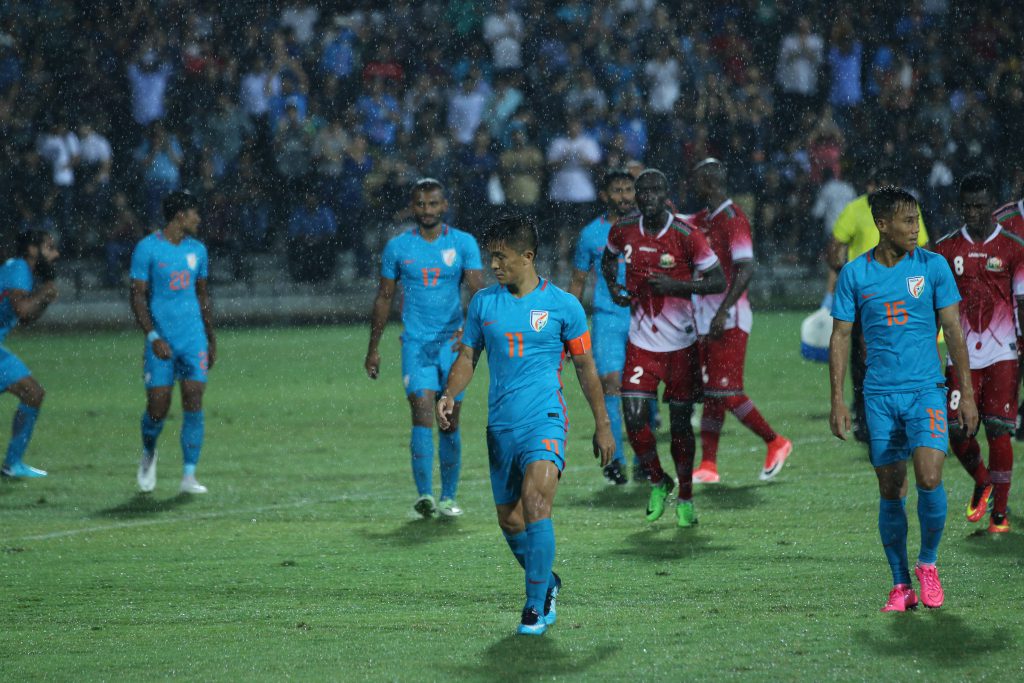 Skipper Chhetri’s penalty strike in the 68th minute and a peach of a goal in added extra time alongwith Jeje Lalpekhlua’s 71st minute strike enabled India to outmaneuver Kenya in a tough contest. The thunderous out-pour of rain at the Andheri Sports Complex made life difficult for both the teams and both adjusted to playing on a wet surface in the opening minutes, with neither taking the risk of attacking.

A free-kick for India went directly into the gloves of the Kenyan custodian whilst on the other end, although Kenya pumped bodies into the Indian defending half, were unable to create a clear scoring opportunity in front of goal. With Kenya, attacking from distance and accumulating corner’s to test India’s pedigree in set pieces, the defensive line of Sandesh Jhingan and Anas thwarted any dangerous chances for the opposition.

In the 22nd minute, Skipper Sunil Chhetri, making history by becoming the second Indian ever to bag 100 International caps, had an opportunity to put India ahead. But, Chhetri’s shot from distance after Jeje had caused panic in the opposition defence, went inches over the bar. Three minutes later, Gurpreet Singh Sandhu was called onto action and the lanky goalkeeper dived at full stretch to keep a rasping shot from distance out.

Changing over, Kenya almost gave India a scare in the 49th minute when Ovella Ochieng burst through the centre of the Indian defence but could only shoot inches wide of the goal. In the 55th minute, India had a golden opportunity to take the lead but Sunil Chhetri failed to make proper connection with on a volley after a Halicharan cross from the flanks.

With the momentum in India’s favour, Constantine’s men kept on attacking and in the 63rd minute Pronoy Halder’s shot almost took the lead for India but some acrobatic goalkeeping by the Kenyan custodian kept his shot at bay. Cometh the moment, cometh the man and in the 68th minute, Sunil Chhetri scored in his 100thInternational cap, courtesy of a penalty kick to give India a solitary goal lead. In the 71st minute, Jeje Lalpekhlua hammered home from close range to double India’s lead over Kenya after a quick play on the flanks to make most of India’s attacking momentum.

In the dying embers of the match, Sunil Chhetri burst onto the opposition goal and in an exquisite manner chipped the ball over the onrushing goalkeeper to finish a sublime move into the back of the net, giving India a 3-0 lead. With his second goal of the match, Sunil Chhetri scored his 61st goal in International football in 100 International matches.

The Indian defence line contained the Kenya initiatives to reduce the deficit and kept the Kenyan forwards at bay as the full-time scoreline read 3-0 in India’s favour. India face New Zealand next on June 07, 2018 in the Hero Intercontinental Cup.

Also Read: I had a dream but never dreamt of playing 100 matches: Sunil Chhetri

Top 10 most expensive players!
I expect the stands to be full in the next two matches: Constantine