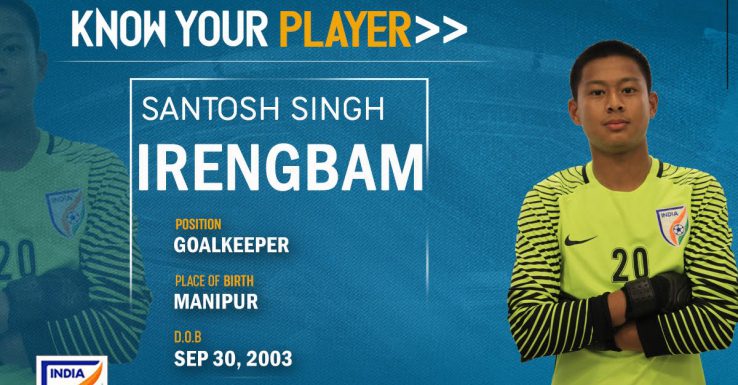 Hailing from Moirang in Manipur like his idol, goalkeeper Santosh Singh wastes little time to announce Dheeraj Singh Moirangthem and Vishal Kaith as his idols. However, the connect with Dheeraj is a little too personal.

It isn’t common for one teenager to idolize another and rarely does one teenager gets inspired by the other but the beauty of football is such that it transcends all creeds and egos. One of the major aims of the FIFA U-17 World Cup 2017 India, in which Dheeraj Singh starred, was to create a following for Indian football and leaving behind a legacy. But what bigger legacy will the FIFA U-17 World Cup 2017 India leave than the current Indian U-16 goalkeeper idolizing the former Indian U-17 World Cup custodian?

“Who wasn’t inspired when Dheeraj Singh made all those saves in the World Cup in 2017?”, Santosh asks. “It was that moment when he denied a USA attempt from close range that I became his fan. It was in that moment I was inspired by him and I wanted to replicate his form on the field of play”

“Moirang is a small town in Manipur and we grew a little distance apart from each other and hence it makes the story all too personal for me. If Dheeraj can do it, so can I and if I can do it, then I believe all the kids who want to be footballers can”

“All of us just need a role model to guide us and show that it is possible to live our dreams”, Santosh added.

No Indian team has ever qualified for the FIFA U-17 World Cup except virtue of hosts.

“We want to create history and qualify for the FIFA U-17 World Cup. It will be very hard and challenging but we are ready for that. Come what may, we will give our bests on the field and fight till the very end. We do not get a bigger stage than this to inspire other kids and we have to play to our fullest potential to inspire them – like I was when I saw Dheeraj play”, he added.