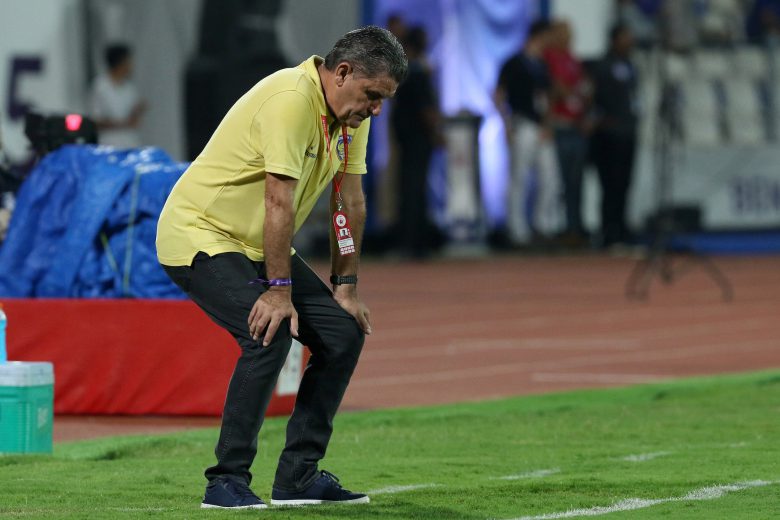 Defending champions Chennaiyin FC are potentially facing a worst ever crises and it could soon be too late if they don’t fix the defensive lapses.

They would then on go on to quell the challenge of attacking teams like FC Goa and Bengaluru FC in the play-offs and land their second ISL title. In fact, the coach had made it apparent on many occasions that he took pride in their defensive organisation. However, they are looking at their worst possible start this season. Thursday’s 4-3 loss to NorthEast United, where they threw away a 3-1 lead, means that the Marina Machans have lost all three of their opening games in the ongoing season.

The team have already conceded eight goals in the three fixtures, with Goa pumping three past them and Bengaluru registering a 1-0 win. Tellingly, most of the goals have stemmed from defensive mistakes. The English coach was at pains to explain that such lackadaisical defending was not something he expected from his team.

“Without any question, we started very very well (against NorthEast United), played very good football with a lot of energy and it was one-way traffic. We were good value for our two-goal lead. We gifted a goal but got back to 3-1 up. Then we gifted two more goals,” he lamented. “Our defensive displays in the last 12 months have been our strong points. We always played well defensively. Today, we gifted four goals literally. Not the sort of thing I would expect from my team.”

While a stable backline was a feature of Chennaiyin FC’s campaign last season, Gregory has been forced to shuffle his defence after the underwhelming displays at the back. Inigo Calderon was deployed in midfield against NorthEast United and Francisco Fernandes, a winger by trade, played as the right-back. But the move would back-fire as Bartholomew Ogbeche’s hat-trick inspired the Highlanders to a famous win.

The former Aston Villa boss pointed out that the defensive errors have undermined his team’s offensive displays. “For us to score three goals and not get anything is soul destroying. Our offensive players will be disappointed. They did their bit. I need to address our defence,” he stated.

After losing three games in a row, Chennaiyin FC have matched their worst-ever losing streak which dates back to November 2015 when they were beaten by FC Goa, NorthEast United and ATK in three consecutive matches. Incidentally, they would win the title that season.

Gregory desperately needs to inspire his side to turn their fortunes around quickly or see their names in the record books for the wrong reasons. “Football is like this. It can kick you in the teeth. We have another game in Delhi in a few more days. My first job is to pick them (team) up, dust them up and go for the next games.”

Chennaiyin FC face Delhi Dynamos next, on Tuesday, in Delhi.

KSA Adv Kudrolli football tournament: Roger Sam slams four in Karnataka’s victory
It is never over until it is really over for me : Ogbeche