Bragging rights up for grabs for the 9th Maha Derby 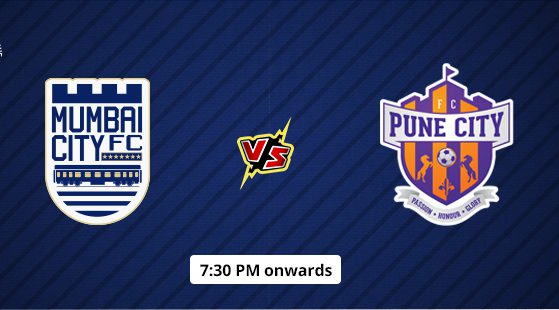 The first Maha Derby of the season is upon us and it promises to be an engaging battle between the host Mumbai City FC and the neighboring FC Pune City.

Neither team will settle for anything less than a victory and the bragging rights that come along with it when they face each other in the Hero Indian Super League on Friday at Mumbai Football Arena.

Interestingly, Pune City’s last league win came in this same fixture against Mumbai City last season. The Stallions had won the home tie 1-0 before travelling to Mumbai to seal the bragging rights with a 2-0 win. In fact, the Islanders have not won any of their previous three matches against the Stallions at home.

Jorge Costa will demand more from his foreign contingent on Friday after managing only a loss and a draw against Jamshedpur FC and Kerala Blasters respectively in their opening two games. “The results were not what we wanted, especially in the first game at home. But we are working good and I have the same confidence in the team. I’m hoping we can do better tomorrow and hopefully, we can get three points,” said an optimistic Costa.

The likes Paulo Machado, Arnold Issoko and Rafael Bastos will have a huge role to play if they are to overcome a Pune City side which possesses a fearsome attack which has been boosted by the return of Marcelinho. “Pune are a very good team. We are building a new team and Pune have almost the same team from last season. They have an advantage there and also have a very good coach. It will be a difficult game for us,” recon the Mumbai coach Costa. 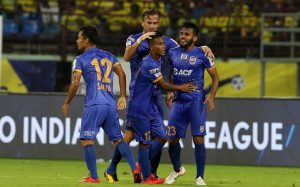 Pranjal Bhumij celebrates with his teammates during match 7 of the Hero Indian Super League 2018 ( ISL ) between Kerala Blasters and Mumbai City FC held at the Jawaharlal Nehru Stadium, Kochi, India on the 5th October Photo by: Faheem Hussain /SPORTZPICS for ISL

Marcelinho is a seasoned campaigner whose individual brilliance and ability to score regularly will be a thorn for any defence to deal with. When Emiliano Alfaro’s sheer work rate and Diego Carlos’ flair from the wings are added to the mix, Pune City’s attack turns extremely potent. Marcelinho and Alfaro are without doubt a lethal combination. The pair scored 17 of Pune City’s 31 goals last season – a whopping 54.84 per cent of the team’s tally.

Marcelinho missed Pune’s opener due to a suspension and his absence was dearly felt. The Stallions struggled in the attacking third and were dominated by Delhi Dynamos. Moreover, whenever the 31-year-old has scored a goal, Pune City have not lost a game.

Coach Miguel Angel Portugal is confident of securing a win on Friday as well. “It’s the second match for us. I know that they (Mumbai) lost their first match here against Jamshedpur but against Kerala Blasters, Mumbai played well. Against Jamshedpur, they played well in the first half. But I know what’s the problem with Mumbai and we’ll try to win,” he said.

Protecting the hosts’ backline against Marcelinho & co. will be Lucian Goian who has been the lone bright spot in an otherwise average Mumbai City defence. The battle between Mumbai’s defence and Pune’s attack should turn out to be the defining battle in this match. The match-up also sees Costa’s pragmatic approach come up against a possession-based style of Miguel Portugal.

With both sides chasing their first win of the season, the Maha Derby has plenty at stake for the fans, players and the coaches.

o Their only win against Pune at home was in the inaugural season of ISL when an Andre Francisco Moritz hat-trick ensured a 5-0 drubbing.

o Their last win against Pune came in 2016 at Pune in a match they won 1-0.
o They are winless in their previous 3 matches against Pune.