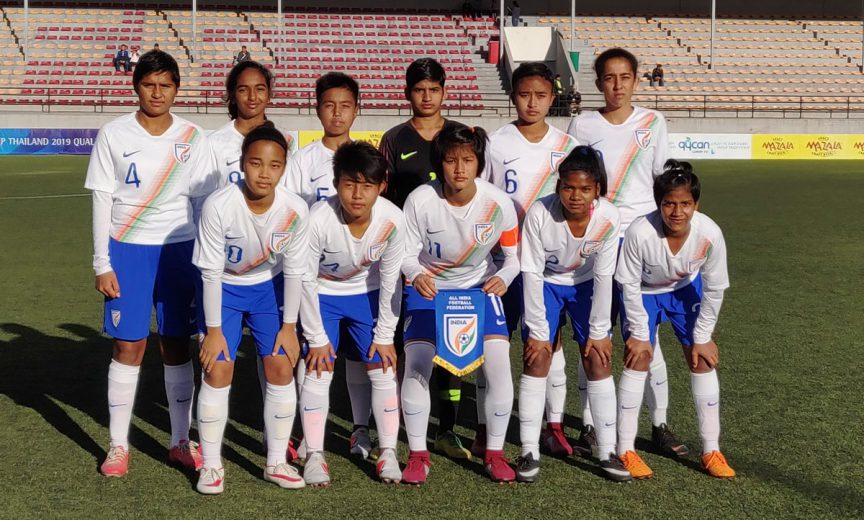 Needing a win to qualify, India were cruising with a one goal lead before a late Laos strike meant India were held to a draw eliminating them from qualification

India U-16 girls held to a 1-1 draw by eventual table-toppers Laos in their final fixture of the first round of the AFC U-16 Women’s Championship Thailand 2019 Qualifiers at the MFF Stadium in Ulaan Baatar today (September 23, 2018).

Following the result, Laos, having amassed 10 points from 4 matches qualified to the second round of the qualification having shattered India’s hope. India finished their campaign with 7 from 4 matches. Aveka Singh (18′) opened the scoring for India form a well-taken corner by Lynda Kom to give India an early lead but Pe (82’) struck late to steal an all-important point from the tie.

Coach Firmin D’Souza made as many as two changes in the starting line-up having brought in Pinku Devi and Kritina Devi in the places of Anju and Kiran respectively. Laos, who needed only a point to secure their berth in the second round of qualification, were set to miss the services of their ace striker Phimpa who was suspended today.

India, having switched to a 4-4-2 formation from their conventional 3-4-3 one, caught Laos off-guard in the 3rd minute but Sunita was ruled offside. After the 15-minute mark, India earned back-to-back corners and on the second corner, they broke the deadlock from a superb effort from Aveka.

Lynda took a long corner directed to Shilky but the skipper’s side-tapping landed closer to Aveka after getting rebounded off the defender. Aveka placed it nicely to find the top corner of the net to open the scoreline. In the added time of the first half, Sunita got an opportunity to double the lead but before she could toe it rightly, the goalie came in the middle to thwart her effort. The scoreboard read 1-0 in favour of the Indians at the end of the first-half.

Following the changeover, Laos changed the gear but Indian defenders held their nerves to thwart their every single effort. Lynda probably had the easiest opportunity of the match in the 74th minute. The winger was left completely unmarked near the second post but she miscued the chance to gift Laos a lifeline.

8 minutes to the end of regulation time, Pe hit the target to dash India’s dream of making it to the second round of the qualifiers.

India U16 aim to rewrite football history against Iran
AFC U16 Championship: Goalkeeper Neeraj stars as India hold Iran for the first time in 33 years