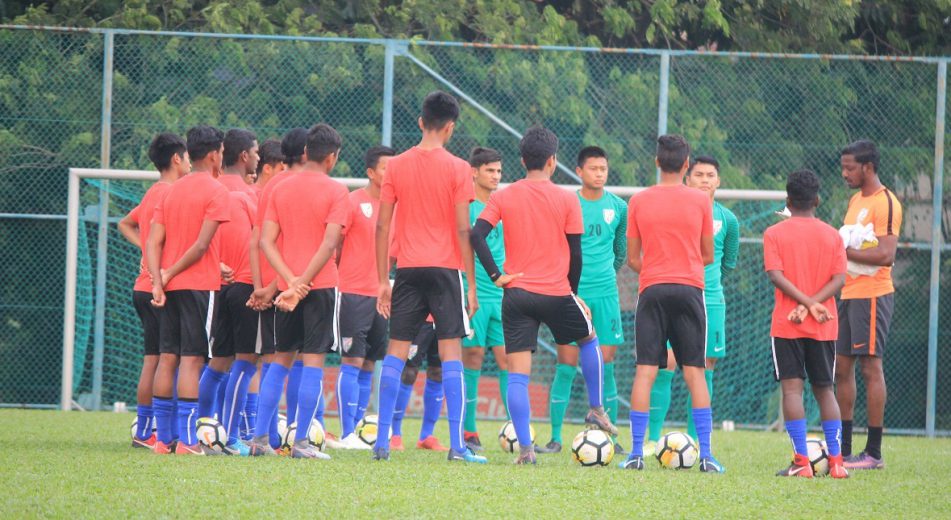 It was back in 2002 when India had last qualified for the quarterfinals of the AFC U-16 Championship – their best ever performance in the competition so far. Since then, no Indian U-16 team has ever reached the quarterfinal stage.

16 years later, Bibiano Fernandes coached India U-16 National Team have a chance to equal India’s best ever performance in the AFC U-16s Championship when the colts face Indonesia tomorrow (September 27, 2018) in their last group stage match.

As it stands, both India have Indonesia have four points from their two matches. But Indonesia sit atop Group C courtesy superior their goal difference.

A win or a draw against Indonesia will see India progress to the quarter-final. However, a loss can also see India progress only if the other match between Iran and Vietnam which also kicks-off at the same time ends in a draw. The kick-offs for both the matches are slated for IST 6.15pm on Thursday (September 27, 2018).

Permutations and combinations aside, Coach Bibiano Fernandes is looking for nothing less than a win to secure the progression. “We always play for a win and we will do so against Indonesia as well. We know how the group stands and it would be favourable for us if we get the win and see ourselves through. We do not want to rely on other teams to do the job for us,” Bibiano stated.

“But it’s not easy,” he added. “Indonesia are an efficient team in attack and have swift forwards who bank on their pacy counter-attacks. We would have to be on our level best if we are to get the better of them”

“For Indonesia the result against Iran was a very positive start and the same was for us against Vietnam. Against an Iran that was looking for nothing short of a win, we played out a draw and gained a point,” Bibiano recollected. “But football matches are not won on paper. On the field of play we are aware of the challenges that Indonesia will present and are ready to face them.”

With Korea Republic securing qualification last night as table toppers of Group D, India could possibly face them in the quarterfinals if the Colts finish runners-up in Group C. “It’s too early to think that far,” Bibiano maintained. “At the moment, we are just focusing on the match against Indonesia.”