FC Goa took on FC Cartagena in their first pre-season friendly at the La Manga Club in Murcia, Spain but were unable to come away with a victory as the Spanish outfit ran out 4-1 winners. 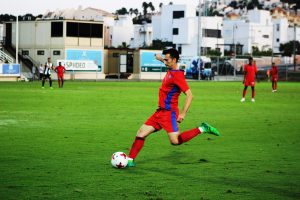 FC Cartagena player Kuki Zalazar got on to the scoresheet in the first minute and the lead was doubled 12 minutes later. Adrian Colunga got the Gaurs back in contention with a good team goal in the 18th minute, but the team was unable to pull another goal back as Cartagena added another couple of goals before half-time. The Gaurs put on an improved performance in the second half but were unable to get on to the score sheet.

Laxmikant Kattimani was handed the captain’s armband ahead of the match and started in goal. Chinglensana Singh and Bruno Pinheiro started as the central defense pairing with Seriton Fernandes and Jovel Martins starting as full backs. Pronay Halder and Ahmed Jahouh were given the task of playing in central midfield with Brandon Fernades, Manuel Arana operating on the wings. Edu Bedia played as an attacking midfielder behind Adrian Colunga.

The Gaurs got off to a bad start as they conceded two goals within the first 13 minutes after defensive lapses. Cartagena striker Kuki Zalazar was quick to pounce and put his side ahead seconds after kick off and Cristo was on hand to double the lead. Brandon was replaced by Mandar Rao Dessai early on after he picked up a minor knock. Thereafter, Sergio Lobera’s men settled down and looked for a way back into the game and they were rewarded with their persistence after a good team move saw Arana slip a lofted through ball to Colunga who promptly put the ball in the back of the net to bring the Gaurs back into contention. Seriton was the first player to go into the referee’s book for a tackle in an attempt to win possession back.

With Sergio Lobera’s men looking to push forward, they were caught out in defense as Zalazar scored his second of the evening. Three minutes later, the Gaurs were 4-1 down with Poley beating the defense to net Cartagena’s fourth goal with the referee calling time not long after.

There were a host of changes for both teams in the second half. Sergio Juste, Pratesh Shirodkar, Mohammad Ali, Manuel Lanzarote, Coro, Liston Colaco, Yasir Mohammad, Kingsley Fernandes and Manvir Singh came on for Bruno, Seriton, Chinglensana, Arana, Colunga, Jovel, Edu, Jahouh and Pronay respectively. The Gaurs put on a much improved second half performance as they tried to salvage something from the encounter. Sergio Juste, Ali and Liston looked sharp in their first match for the club, with Pratesh impressing as well. However, the Gaurs were unable to get the ball into the back of the back. Cartagena did manage to score a fifth goal late on, but the referee’s flag for offside denied them.

The Gaurs will take on Real Murcia B in what promises to be an exciting encounter on Monday, 16th October 2017.