Football as an instrument of Nationalism in colonial Bengal- Part 2

In my last article on 25th March 2015, I explained the initial growth of football in colonial Calcutta and the effect of the racial policy adopted by the British rulers on the game of football in Calcutta. In this article, I shall focus on the success of Mohun Bagan in the IFA Shield in 1911 and its impact on the movement against the partition of Bengal.

Mohun Bagan, the identity of nationalism in Indian football, was set up in the cultural and political centre of North Calcutta on 15th august 1889. The name of the club was taken from Kirti Mitra’s Mohun Bagan Villa. The inaugural meeting of the club was held at the residence of the prominent leader of Congress, Shri Bhupendranath Basu. 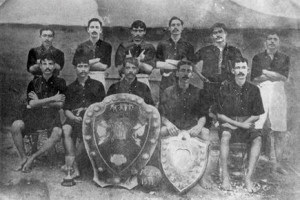 Mohun Bagan started its journey in the IFA Shield on 10th July 1911 against St. Xavier’s College. Mohun Bagan won the match convincingly by three goals to nil. The club won the second match against the Rangers Club by two goals to one. In the third match, Mohun Bagan defeated the Rifle Brigade by a solitary goal which helped them to secure a place in the semi final. The semi final match against Middlesex Regiment ended in one all draw, while Mohun Bagan won the reply match by scoring three goals. History was created on 29th July 1911 when Mohun Bagan defeated East York Regiment in the final of the IFA Shield by two goals to one. Shibdas Bhaduri and Abilash Ghosh secured permanent place in the history of Indian football by scoring two goals for Mohun Bagan in the final match. Table 6 represents the performance of Mohun Bagan in the IFA Shield in 1911.

Almost 80,000 people gathered at the Maidan Ground on 29th July 1911 to see the dominance of an Indian team over a British team. However, only a few thousand could see the match properly. The result of the match was conveyed to the rest by flying kites. The green kites symbolized the progress of Mohun Bagan, while the black kites symbolized the progress of the British team. The tickets of the final match were sold at a higher price. A two-rupee ticket was sold at a price of fifteen rupees. It was one of the initials instances of black marketing in Indian sports.

The epochal success of Mohun Bagan in the IFA Shield in 1911 inspired the Bengali community to stand united against the decision of partition of Bengal. The implication of this win was highlighted in a reporting of The Empire, which wrote, “Even now after 48 hours after the great and glorious victory of Mohun Bagan over East York’s, the significance of the event has not been fully realized. It was a fine achievement, the finest indeed in the annals of football in India.” It continued, “All honours to Mohun Bagan! Those eleven players are not only a glory to themselves and to their club, but the great nation that they belong”. The importance of this success was portrayed in a report in The Englishman on 31st July 1911 as “What the Congress has failed to achieve, Mohun Bagan has. In other words they have succeeded in degrading the English.” The impact of this win was mentioned in a report of Basumati on 5th August 1911 as “we have seen Bengalis assembled on various occasions of danger, distress and sorrow such as that of the partition, the Consent Bill and the death of a great man. But never before did we witness such vast assembly such a demonstration of joy………. Mohun Bagan has infused a new life into the lifeless and cheerless Bengalis………… In a country, where union takes place only to dissolve, where repulsion is more powerful than attraction, you have been able to knit together so many hearts”. The Amrita Bazar Patrika, on 31st July 1911, mentioned that this event clearly represented the physical and mental prowess of the Bengalis.

This success by Mohun Bagan was viewed by many as a reply to the racial policy adopted by the British Raj. The sentiment was portrayed in a report of Times of India Illustrated Weekly as, “On Thursday and Friday every Bengali carried his head high and the one theme of conversation in the tramcars, in offices and in those places where the babus congregate most, was the rout of the King’s soldiers in boots and shoes by barefooted Bengali lads.”

Despite the fact that Mohun Bagan comprised of Hindu Bengalis, its victory over the British teams inspired the Muslim community as well. The Mussalman, a Muslim journal, wrote, “Although Mohun Bagan was a team composed of Bengali Hindus, the jubilation in consequence of its success was in fact a sense of universal joy, which pervaded the feeling of the Hindus, the Mohammedans and the Christians alike”. The Comrade, another Muslim journal, wrote, “We hereby join the chorus of praise and jubilation over the victory of Mohun Bagan”. Therefore, it can be said that the historic win of Mohun Bagan in the IFA Shield played an important role in uniting both Hindus and Muslims together.

The defeat of the British team by an Indian team was also celebrated by the commercial and cultural communities of Kolkata. Messrs. S. Roy & Co offered football at a cheaper rate. Messrs. Hald and Chatt offered harmonium at 10% discount for a period of two months. The Standard Cycle Company, on 31st July 1911, distributed the photographs of the Mohun Bagan squad. It may be argued that the commercial implication in football in India was started with this emphatic win of Mohun Bagan. The Great National Theater added a by-line with their promotion ‘Balaji Rao’. The by-line was “Mohun Bagan has won the Shield! It is a victory for Baji Rao”. The Adi Arya Saraswat Samaj staged a theatre called ‘Vismavijaya’ to honour the club.

The triumph of Mohun Bagan in the IFA Shield in 1911 infused vigor into the lifeless and cheerless Bengalis. It made them believe that the mighty British could also be defeated. The win of Mohun Bagan inspired them to stand united against the decision of partition of Bengal, irrespective of their religion. This win made them realize that the ‘racially proud’ British could also be defeated by the suppressed Bengalis. The psychological impact of this win cannot be ignored. However, it should be remembered that Mohun Bagan was not the first club to beat a British team. Shobhabazar Club was the first Indian club to beat a British team in the Trades Cup in 1892. In 1900, National Association became the first Indian club to win the Trades Cup by defeating Shibpur Civil Engineering College which comprised of only the British students. Another club from Bengal, Sanatan Sampradaya Football Club, beat the British team, HLIA Company, in the final of Oriental Cup on 25th July. However, the impact of the historic win of Mohun Bagan in the IFA Shield in 1911 was more significant as it provided an impetus to the movement against partition of Bengal.