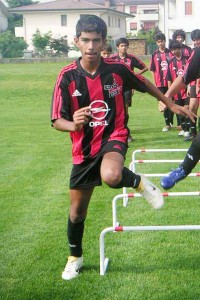 PIFA student and player Kean Lewis has signed for I league Champions – McDowell Mohun Bagan AC over the weekend..

Kean’s talent was recognized by PIFA at the PIFA International camp in Goa in 2005. He became a regular student at the PIFA Bandra training center for 3 years.

He was the winner of the skills contest held at the PIFA Champions Tour to Manchester in 2005 thus making him eligible to compete at the World famous Bobby Charlton Soccer School – Skills Finale (won by David Beckham in 1986) held in December 2005. He also attended the PIFA Champion Tour to AC Milan in 2006, he got to meet the entire team of AC Milan and AS Roma at the San Siro, the likes of Kaka, Maldini, Cafu, Pirlo and Totti.

At the camp, he won the best player impressing the AC Milan coaches Francesco Sette and Fabiano Ballarin. Inspiring him to play top level football.

PIFA organised a trial for him at Leicester City FC at the age of 13, in 2006. He was then recommended to join Tata Football Academy (TFA) in 2008. 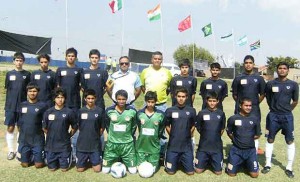 In March 2009, Kean represented the PIFA Colaba FC U17 team that was invited to play a FIFA recognized tournament in South Africa – Gauteng Future Champions, alongside his team mate
?Karan Sawhney who signed for Bengaluru FC, last year.

Although Kean used to play striker, the coach put him in midfield. “Kean has excellent spatial vision, he has an ability to feign and deliver pin point passes both long and short to break the defense line” – Coach Nirvan (UEFA licensed)

He got an opportunity of a lifetime to play against Inter Milan and although they lost 1-4, his performance was outstanding, he assisted in the one goal.

PIFA advised him to go abroad to pursue a career in football. He enrolled at the Fairleigh Dickinson University (FDU) in New Jersey, USA in 2010 to do a 4 year Sports Administration Undergraduate degree course and joined Houston Dynamo U-23 team.

On completion, he returned to India and with the help of a couple of Mohun Bagan fans from Mumbai (Kaushik Dutta and Anjan Datta) took the initiative to take Kean Lewis to Mohun Bagan for trials.

“Kean is an intelligent and extremely motivated player as well as academically.  He has the right attitude, pursued his dream with the help of his supporting parents Foster & Pearl. There is no doubt that he will excel at whatever he does, we wish him all the best at Mohun Bagan.” –  Anjali Shah, PIFA Director