A team, deserving to play at the top level, HDFC Bank the giants of ‘corporate football tournament’ in Mumbai, being coached by Julian D’silva, look in really good shape this season. This team does have all the potential to do well in Mumbai District Football Association (MDFA) League. Last season they couldn’t manage to qualify for the Super Division, falling short on a goal average. In their opening game of the MDFA league 1st division they registered a comfortable win with good 4-1 margin against Hearts FC at St. Xavier’s ground, Parel on Sunday. 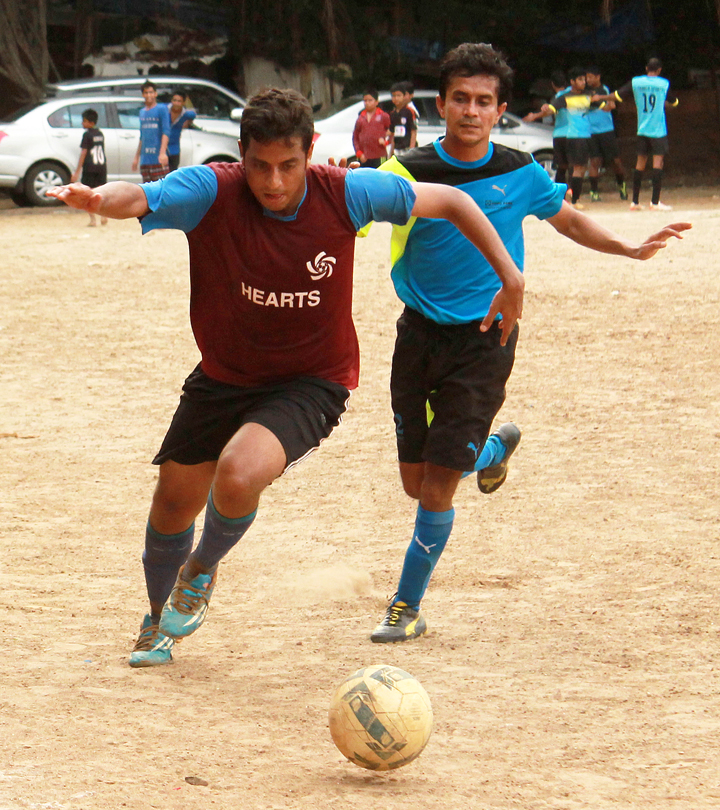 HDFC Bank and Hearts FC players chasing for the boll

HDFC kept the ball possession and dominated the midfield throughout the game. Dennis Menezes one of the most experienced campaigners, lead their midfield with his effective distribution, along with former Customs & Mumbai FC player Nelson Cardoz, were the striking force for HDFC. Keeping the momentum right from the kickoff whistle they got the lead just after 4 minutes of play. The HDFC scoring account was opened by the very skilled Nelson Cardoz. Their lead did not last long though, within the next 4 minutes Heart FC equalized the score with a neat finish by Jeevan Jain. It was the only effective move that Hearts FC had initiated, most of time they were busy defending the ferocious HDFC attack, till the end of first half HDFC had a 3 goal lead. Rakesh Yadav and Blaise Fernandes scored the 2nd and 3rd goals respectively.

The 2nd half was evenly poised, both teams were likely to score, but HDFC looking to make the most of the lessons learnt from last season were all out to better their goal average. For HDFC, Siddharth Puthran is a key element on the right wing, his contribution met its worth in the final 10 minutes of the game, he took a long-range shot which hit the crossbar bar and the rebound set up an easy opportunity for Jayesh Naik to tap in the 4th goal. Results from the other 2nd division and 1st division matches played at St. Xavier’s Ground, Parel

Franco Sports are back with the bang
Lets Talk Football