Crystal Palace FC and the Premier League, in support of Mumbai City FC held the ‘Play for Palace Trial Night’ at Cooperage in Mumbai on 11th December 2014. A team of academy coaches which included former Crystal Palace striker Mark Bright, had a look at a hundred and four local kids between the age of 16-19.0

Crystal Palace will give one kid a chance to go to London and train with their world famous academy. The final round of selection will take place at the Barclays Premier League Live event held at the MMRDA ground in Bandra Kurla Complex on Sunday, 14th December, after the panel shortlisted eight young and talented players on Thursday night.

This is Crystal Palace’s first ever visit to India as they look to strengthen their footballing base in the country. Palace took this opportunity to have a look at some of India’s budding youngsters.

Gary Morgan, a member of Crystal Palace Academy’s coaching staff elaborated on his club’s vision to hold such an event in Mumbai. “As a club, we are looking to forge closer links with India through the event at the weekend, but then we thought we would like to give a player from here a chance to train in our world famous academy in London and give him en experience about what it is like training with a Premier League club”.

After spending around four hours, looking at the players and shortlisting the final eight, Gary found it tough, but was pleased with the octet that was selected. “We were pleasantly surprised. The overall level was good. It is always tough to select eight out of a hundred and four, and the lads got a bit fatigued in the end, but we are happy with the lot that we have selected”.

Gary had good things to say about Indian football and the Indian Super League (ISL) and feels India are on the right track and will soon be right up there with the likes of the Major League Soccer (MLS). Gary quoted, “I think it is growing. I’ve watched the ISL on TV and I feel it is good as a spectacle. There are lots of fans supporting it. It’s a good event. The MLS in the USA took time to grow, similarly this will need time as well, but India will be there in the end. It will be a good league.”

On being asked whether there was any possibility of Crystal Palace touring India in the near future, Gary refused to rule out the possibility. “Who knows? We’ve had a great week here in India and there is Sunday to go as well. I won’t rule it out”.

There was added inspiration for the young guns as Mumbai City’s star striker Andre Moritz made an appearance at Cooperage. Andre Moritz who left the city in his awe after his breathtaking hat-trick against Pune City, played for Crystal Palace for a season, making twenty seven appearances, and scoring five times for The Eagles.

There was added sheen to the night after the magnificent Premier League trophy was on display as the players tried to impress Mark Bright and co. Mumbai City FC provided great support for the event, showcasing their commitment at developing the game at the grass root level.

Dinesh Nair, the head of grass root development in Mumbai, also an ex-player, was delighted with the night’s work and the initiative by Crystal Palace. “It’s great to have such events. We are not going to produce players overnight and such initiatives will surely help. So we at Mumbai City FC want to help our kids out, especially when such a big opportunity comes there way”.

Dinesh believed that the event would have a great positive impact on the youngsters on show and felt they learnt a lot out of this. “Today was a great chance for the young kids, to play in front of such great players and coaches from the Premier League. The Premier League is widely followed and over six hundred kids came along from which we shortlisted the pool for today. I feel they are very fortunate and it’s a great learning curve for them”.

He wants the more kids from the city to play for the senior side and would welcome any such programs in future. “We at Mumbai City FC want more players to develop and represent the senior team, so we would always welcome such initiatives”.

The focus now shifts to Sunday when the eight selected players will battle it out and only one of them will get a chance to go to England with Crystal Palace. 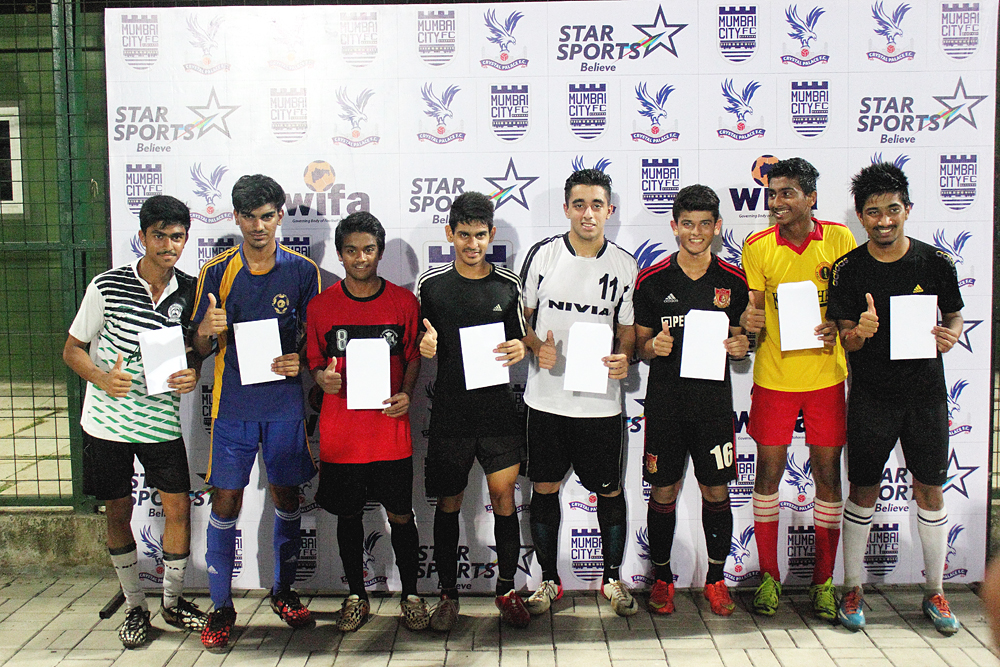 Football Counter would like to wish these players, all the best for Sunday.

I am very confident about my half line and this would be our main strength: Augusto D’Silva – Maharashtra sub junior team Coach
Mumbai FC face Pune FC in u19 I-League opener