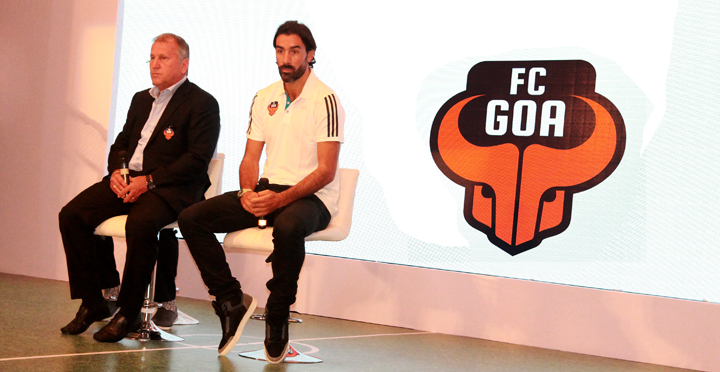 Q. Zico, Are you ready for tomorrow’s match?

A. Zico- Our practice has been going really great all these days. We played three friendlies and we even won them. So yes we are ready for the match tomorrow. From the 27 players we have 25 players who are ready and fit to play.

Q. Friendlies are different from an actual match. How different will the atmosphere be?

Q. Any advice from your experience you would like to pass on to the players?

A. Robert Pires- I have played matches in France, Spain, UK and now in India. Only one thing I would like to say is that ISL is a very good opportunity for India to develop football. I am repeating myself that I am happy to be here. Now I know that Indians love football and like Zico said we are ready for tomorrow’s match.

Q. Do any Indian players ask you for any advice?

A. Robert Pies- Yes of course they ask me for my advice. And I think it’s good and like I said earlier I feel like a teacher and I am here to teach them. There’s quality in football in India and now you have a chance to learn good football as well. I feel like I have a great responsibility on me so its very important for me to help them.

Zico- My career was long time ago. But I have told the players to look at Robert Pires and follow him. It is much easier for them to look at him and understand his style of playing, the way he behaves on the field. So the players have and are learning a lot from Robert Pires.
My advice to the players is if you have a desire to win then you can. Just give your best on the ground and play a good game. I have also told them that if they don’t play good football, I accept that. But they have to give their heart in their game and play. This is what I ask of them.

Q. Coming where from country where football is nothing less than a religion, I would like to know if you are happy with the support staff, training facilities and ground conditions?

A. Zico- At the moment we are very satisfied. We know that there are few things that are missing. But we understand that perfectly. We are very happy with the ground practice that has been happening in the past few days. We understand the shortcomings but we have to overcome that and we try that these shortcoming does not interfere in our games.

Robert Pires- I think everything is good here. This country is huge, and people here love football. Of course I am from UK and football there is religion and I think in India it is the same. But yes I got a good opportunity to play with the Indian players and I wish big success for ISL.

Q. Have you tried to incorporate the Samba style in FC Goa?

Q. What did you think about the football level here in India when you arrived here?

A. Zico- I know about Indian football quite well. If I didn’t know I wouldn’t have been doing this tournament. But the biggest problem we have is at the grass root level. Because there are great players at under-15 and under-19 level and they learn only after they become professionals. They need to be taught various aspects of football from the very start and this will definitely help the development of football.

Q. You have played in UK, France and Spain. How difficult is it for you here considering the weather conditions?

Zico- The players feel humidity more while playing but they are getting used to playing in the heat. The weather conditions in Brazil are similar to Goa in fact much worse sometimes. But we have to overcome all these hardships and play to win.

Q. If approached are you prepared to coach India?

A. Zico- I am prepared to train FC Goa.

Q. Iceland has 9 points from qualifying matches. It is a small country which is doing well. How can Indian learn from them?

A. Zico- India has to work hard and if one has the desire they can achieve it.