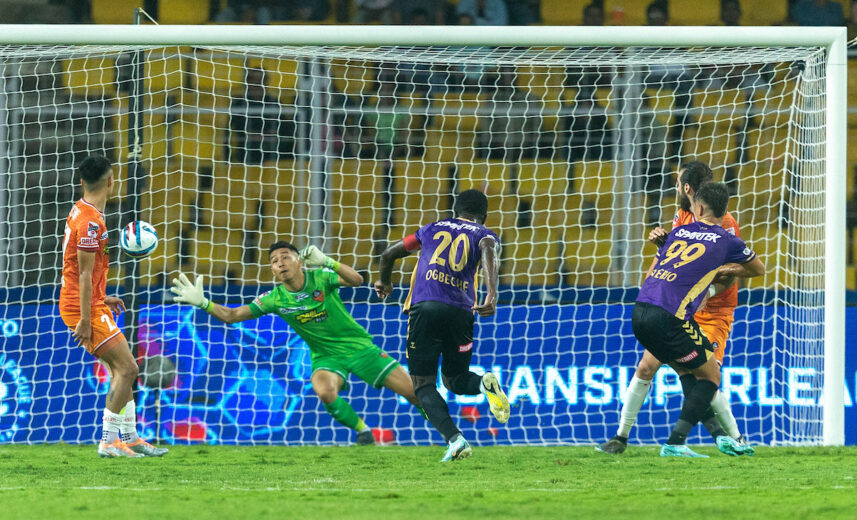 Bartholomew Ogbeche produced a vintage performance as Hyderabad FC went back to top of the Hero Indian Super League (ISL) table once again after beating FC Goa 3-1 at the Jawaharlal Nehru Stadium in Goa on Thursday.

Ogbeche, who had previously scored only three goals in the season coming into the game, put Hyderabad FC in front on two occasions before sealing the result at the end.

Both teams got off to a slow start in this fixture. Neither had created any big chances in the first 15 minutes, but Hyderabad FC have never needed to be in control of the game to score goals, and they showed that once again. Halicharan Narzary picked out Ogbeche from the left flank, and the Nigerian striker placed his header to perfection to give Hyderabad FC the lead in the 20th minute.

FC Goa got their first real chance in the 28th minute. Edu Bedia played an outstanding pass from deep in midfield, but Noah Sadaoui couldn’t find the right contact. The half-chance led to a period where FC Goa made inroads into the final third more often but could not turn that into big chances. Hyderabad FC were happy to sit back, get into a compact shape, and wait for the half-time whistle. The half ended with Hyderabad FC leading 1-0.

In the 54th minute, Sadaoui and Iker Guarrotxena combined to test Hyderabad FC’s goalkeeper Gurmeet Singh, who made a great save to deny Guarrotxena’s volley after picking up a pass from the left. Moments later, FC Goa came up with a similar move but found success. Sadaoui held up the ball on the left before floating it for a rushing Redeem Tlang to power the ball into the back of the net and level the score.

The game had opened up by now, and Hyderabad FC had a great chance to take the lead a few minutes later, thanks to Joel Chianese, but his shot was cleared off the line by Aibanbha Dohling. Sadaoui was finding a lot of joy on the left flank in the second half, and Hyderabad FC seemed to have no answers for him. On one occasion it looked like he’d set up Mohamed Fares to take the lead, but the goal was chalked offside.

FC Goa enjoyed most of the possession but weren’t able to turn that into goals. Ogbeche made them pay for it by putting Hyderabad FC in the lead in the 79th minute. The ISL’s all-time top goalscorer got on the end of a rebound and smashed the ball into the roof of the net to give Hyderabad FC the lead. He got his hat-trick in the 90th minute and confirmed the three points for Hyderabad FC with a sublime header.

Hyderabad FC will host Chennaiyin FC at the G.M.C. Balayogi Atheltic Stadium in Hyderabad on January 12. FC Goa will visit the Indira Gandhi Athletic Stadium in Guwahati to face NorthEast United FC on January 15, and will be hoping Odisha FC slip up when they play next, as even a point to the Juggernauts will push them into sixth place.