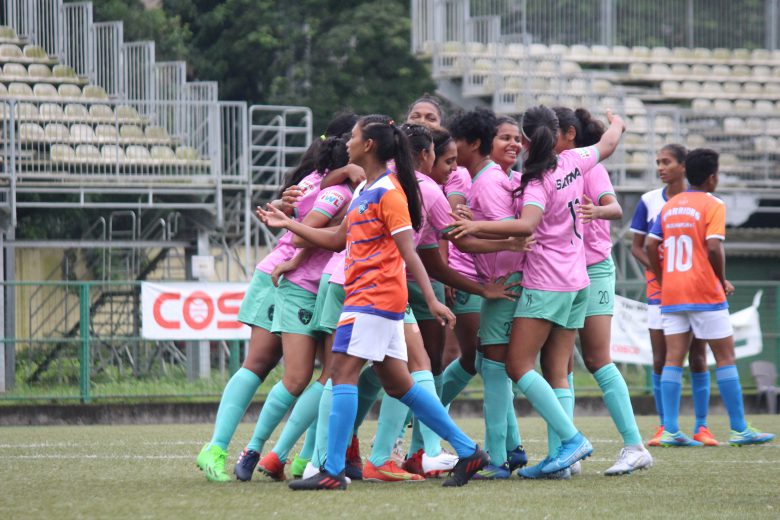 As we enter the final stretch of the league, the top four teams from the league stage will battle it out again in a round-robin format to determine the WIFA Women’s League champions. The round began with the Mumbai Knights taking on Warriors of Kolhapur SC, the latter being the only side to breach the Knights defense in the competition.

The match began with Knights taking charge early on with aggressive intent and it didn’t take them long to break the deadlock. In the fourth minute, Valencia D’mello latched on to a loose ball just outside the box before making a darting run inside the box. Valenica brushed past her marker in the process before taking a left-footed shot from a tight angle, despite a stretched leg from the Kolhapur keeper Arpita Pawar, the ball nestled into the right post to make it 1-0.

Three minutes later, Arpita was forced into action when she had to palm away a powerful goal-bound strike over the post. The resulting corner saw the ball fall for an unmarked Valencia who took a touch before striking it past the keeper to the far corner thereby doubling the Knights lead.

Around the half-hour mark, a defensive mistake from Mumbai Knights gifted Kolhapur Warriors a free-kick just outside the box. Skipper Mrunal Khot unleashed a powerful strike that went through the wall into the net as Kolhapur pulled back the lead. Both sides went back and forth throughout the match with the Knights managing their defensive line better.

Midway through the second half, Knights leading scorer showcased some really good bit of individual brilliance when she made a run through the Warriors defense and although GK Arpita looked to have covered the ground, Priyanka managed to lift the ball up and over the goalie before heading it over the line to make it 3-1. The match eventually fizzled out to an end with Mumbai Knights managing the final part of the game quite well.

Meanwhile, defending Champions PIFA SC continue with their ruthless run as they beat Kenkre 3-0 courtesy of a brace from top scorer Sasmita Behera and a goal from defender Payal while at the other end, PIFA continue to hold the fort as they are yet to concede a single goal in this competition.

The game opened with PIFA looking to set the tempo early with forwarding runs in the Kenkre defense forcing their opponents to commit mistakes. One such mistake proved to be fatal when in the 17th minute, PIFA defender Payal’s ball into the box was poorly judged by Kenkre Keeper as the ball went over her to nestle into the net.

Around the half-hour mark, tournament-leading goal scorer Sasmita Behera showed her poaching skills when she took advantage of a miscommunication between Kenkre defense to loft the ball over the keeper to make it the second goal of the game as PIFA took a 2-0 lead.

In the second half, PIFA continued to look for goals as Kenkre struggled to find an opening. However, Kenkre did come close on twice occasion both from freekicks as an unlucky skipper Harshika’s strikes came off the bar.

In the dying minutes of the game, Sasmita once again found an opening from the middle to dive in and take a shot past the keeper to close the game with a 3-0 lead.