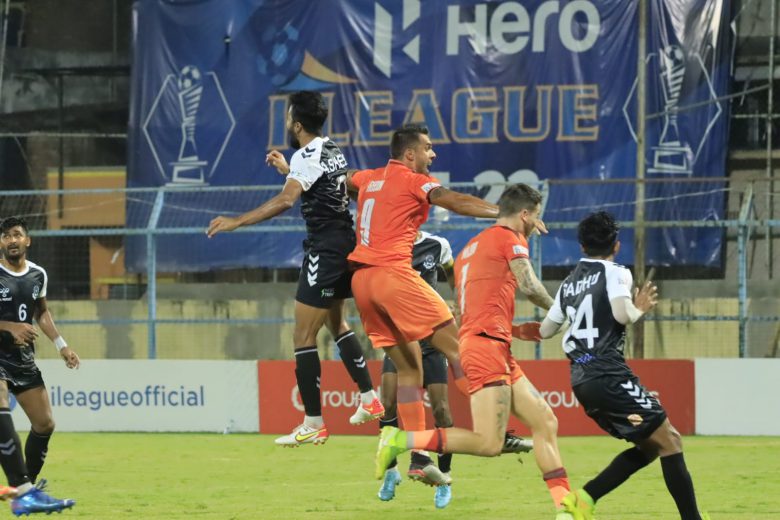 Mohammedan Sporting Club were unable to close the gap between themselves and league leaders Gokulam FC after an entertaining 2-2 draw against RoundGlass Punjab, here at the Naihati Stadium. The game involved more than thirty shots in total but in the end, no one was able to steal the winner.

In the initial stages of the first half, Roundglass Punjab dominated possession while Mohammedan had to endure a barrage of attacks. In the first 15 minutes of the half, RoundGlass had 87% ball possession and had kept the Mohammedan defence on their toes. Mohammedan seemed lost and even rash at times as SK Faiaz was booked for a reckless challenge.

It took Mohammedan a little over twenty minutes to move forward to launch an attack. Luckily for the side in black, they broke the deadlock with their first attack on the Punjab goal. It was Marcus Joseph who struck the ball towards goal. His shot ricocheted off the post and fell to Faisal Ali who only had to tap the ball into an empty net and out of nowhere, Mohammedan were in the lead.

The joy lasted just two minutes as Punjab were awarded a penalty after Travis Major was taken down inside the box by Sujit Sadhu. Skipper Joseba Beitia stepped up and calmly converted the penalty to restore parity. Beitia sent the keeper diving to the wrong side and placed his shot straight down the center.

The game opened up after that. Joseph tried to squeeze one in at the near post but his shot rippled the net from the outside just before the cooling break. Ali almost bagged another goal but his amazing run into the box was halted by the Punjab defence. Shortly after that, Brandon Vanlalremdika played a perfect low cross in but no one was in front of goal to tap it in.

In order to reach the low cross, Faiaz injured himself, went down in front of goal and ended up inadvertently blocking Manoj Mohammad’s on-target strike. Successive Mohammedan attacks, by Joseph and Faiaz, were denied by Jaspreet Singh. In the last few minutes, Wayne Vaz denied Major to get a shot away as the score remained all square.

For the second half, a surprising substitution was made by Mohammedan as skipper Nikola Stojanovic was taken off and replaced by Saiful Rahman, probably because of an injury concern. The major absence in midfield did not hamper Mohammedan attacks as Joseph beat two Punjab players to get his shot away. Unfortunately, the ball flew inches wide of the far post with the keeper rooted in his spot.

Charles Yarney and Shankar Sampingirat were solid at the back and blocked consecutive shots during a Mohammedan attack that involved Joseph, Faiaz and Ali. Mohammedan did not take their foot off the pedal as Andelo Rudovic curled in a promising corner that was headed just wide by Faiaz. Joseph was huffing and puffing but always saw his on-target shots beaten away superbly by Jaspreet.

To get his twelfth goal of the season in this game was a tough task but the constant pressure paid off right after the seventy minute mark. Joseph received the ball right in-front of goal eventually from a corner and smashed it home at the near post with his right foot to give Mohammedan the lead again.

Roundglass Punjab seemed like they had completely switched off as Joseph beat two players to get his shot away. Unfortunately, the ball flew inches wide of the far post with the keeper rooted in his spot.

After the second-half cooling break, Punjab trotted forward in search of an equaliser again. Initial efforts were denied but in the final ten minutes of the game, Major sprinted down the right flank and crossed it in for Kurtis Guthrie who headed the ball in to square it all up.

Opportunities were plenty for both sides. Tired legs of Mohammedan striker’s could not put power behind shots from distance and from close range. At the other end, Kurtis Guthrie was at full-stretch in an attempt to knock the ball into an empty net but could not get the contact he wanted.

At the end of the game, both sides had to settle for a point. The result will send waves of joy through the Gokulam Kerala FC camp as they are five points clear of Mohammedan with a game in hand. Roundglass Punjab will remain in third place, four points behind Mohammedan SC.