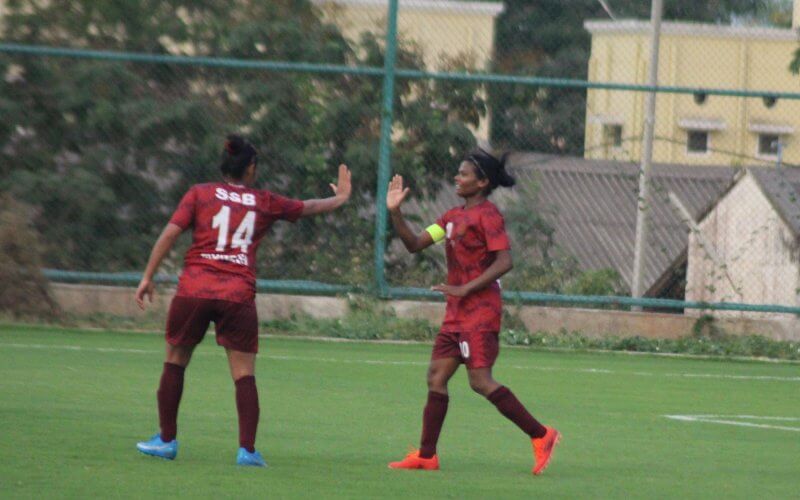 Dular Marandi scored the first hat-trick of the Hero Indian Women’s League on the opening day itself as SSB Women came back from behind to register a thumping 6-2 win over Hans Women FC at the 7th Battalion Ground on Friday (April 15, 2022).

Savi opened the scoring for Hans Women early in the 7th minute with a blasting shot past the opposition goalkeeper. The Delhi-based side continued with their solid start to the game as Jyoti doubled their lead after scoring from the spot in the 20th minute.

With the two-goal lead, Hans Women looked to be in the driver’s seat in the game and kept on with their relentless attacks until the half hour mark. However, moments later, a thunderous strike from distance by Purnima Linda landed straight into the back of the net, giving SSB Women a lifeline.

Moments before the half-time break, the Calcutta Women’s League champions found a much-needed equalizer — Ranjita Devi scoring off a powerful header from inside the box as the two teams went into the break at 2-2.

Almost immediately after the restart, Purnima Linda scored her second to help SSB Women take the lead in the 48th minute. To make matters worse for the Delhi-based side, SSB Women skipper Dular Marandi made it 4-2 just before the hour mark with an unstoppable header straight from the corner.

Hans Women brought on Bhawna Yadav and Asha Thapa to replace Savi Mehta
and Laxmi Arya to help stabilize the side. The Kolkata side kept dominating and found a fifth through Dular Marandi — her second of the game. A beautiful cross from Sandhya Kachhap was turned in by the forward to make it 5-2 in her side’s favour.

With the result in their hands, SSB Women kept the ball possession as Hans Women chased helplessly. In the dying moments of the game, captain Dular Marandi found her moment and squeezed in another to complete a magnificent hat-trick. The prolific forward managed to get enough off a cross from Anibala Devi to make it 6-2.