Defending champions Services got the better of Odisha 2-0, thanks to two second half goals in a Group B game of the Hero 75th National Football Championship for Santosh Trophy at the Kottappadi Football Stadium in Malappuram here on Monday. The result means Odisha will have to wait for the outcome of the Karnataka-Gujarat game to find out who makes it through to the semifinals of the tournament.

Odisha, needing a point to secure qualification, started the brighter and dominated proceedings in the first half. The first chance of the game fell to left winger Chandra Muduli. After some fine build-up play by Odisha, who kept the ball on the ground for the most part of the game, Chandra Muduli got the ball with space to run into. He whipped in a dangerous ball inside the box but Kartik Hantal could not get any sort of contact to divert the ball goalwards.

Another presentable chance fell to the young winger Chandra this time in the 40th minute. A through ball from the Odisha midfield was chased down by the pacey winger, who managed to outrun two defenders but his final touch let him down and allowed Services goalkeeper Subhajit Basu to close him down in the nick of time. The rebound fell to Kartik Hantal but he failed to hit the rebound on target as the ball trickled wide.

Kartik Hantal was put clear through on goal but the young forward took too much time to settle which allowed Services defender Zothanpuia to put in a brilliant last ditch tackle to take the ball off the attacker’s feet at the last moment. This did not deter Kartik Hantal as he kept trying hard and he came closest to handing Odisha a well deserved lead. His left footed effort from a narrow angle in the 42nd minute rattled the crossbar and ensured both teams headed into the break goalless. 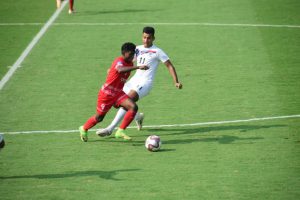 Services’ Mohammad Danish had a half chance wherein he cut in from the left wing and tried to curl the ball towards the top right corner but it went narrowly wide. Odisha’s defensive gameplan seemed to be working with Services hardly having any noteworthy attempts until the 74th minute.

The ball fell to left back Sunil B, whose pinpoint cross was met by a towering header from skipper Vivek Kumar and his header went beyond the reach of a diving Chinmaya Sekhar Behera. That goal suddenly sucked all the fight away from Odisha and they seemed to lose their heads. They almost let in a comical own goal after miscommunication between Chinmaya Sekhar Behera and defender Prabin Tigga but somehow the goalie managed to spare his team’s blushes. 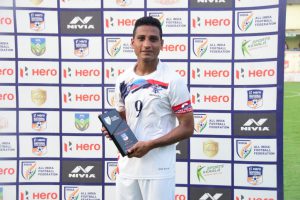 And it got worse for Odisha soon after. Another fine run from Sunil B ended in the defender trying to cross into a dangerous area. The Odisha defenders managed to block the cross but the rebound fell to substitute Nikhil Sharma who made no mistake in dispatching the ball goalwards. If that was not all, towards the end of the game, Odisha defender Abhishek Rawat saw a straight red card.

Odisha had one final chance to reduce the margin of defeat. Arapan Lakra’s free-kick beat the wall and goalkeeper Subhajit Basu but it thundered off the upright as the match ended 2-0 in the defending champions’ favour.

The result means Odisha will have to wait for the final outcome of the match between Karnataka and Gujarat to know their fate. If Karnataka manage to score at least thrice, while registering at least a two-goal winning margin, then it will be curtains for Odisha and Karnataka will go through as the second placed team in Group B. Services, on the other hand, finished their disappointing campaign on a high with only their second win.